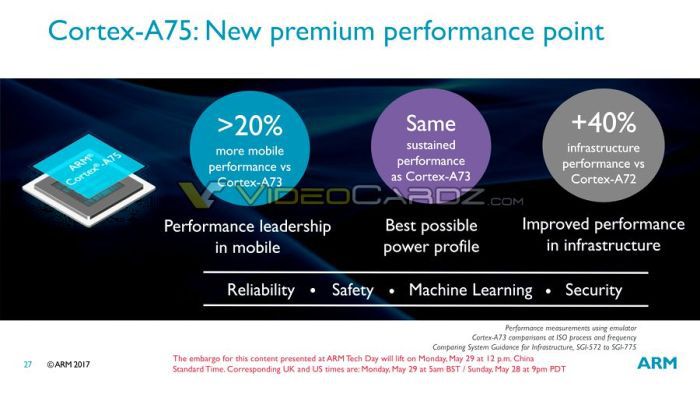 ARM's all set to launch its latest Cortex chip designs tomorrow. The company will launch three new designs tomorrow. These will be the Cortex A75, the Cortex A55 and the Mali G72 GPU. Given that all current 10nm processors are based on old designs from the UK company, the launch will be a big deal. If you were waiting for the details, wait no more. A couple of slides related to the products have surfaced and we've got them for you. Take a look below to find out more.

Slides For ARM's Cortex A55, Cortex A75 And Mali G72 Leaked; Show Several Details And Improvements

When it comes to smartphone microprocessors, ARM is king. The UK design house has its paws everywhere. All top end processors use ARM's core designs. So when the company launches upgrades, there's good reason to be excited. ARM will launch its latest chip designs tomorrow. These will be the Cortex A75, the Cortex A55 and the Mali G72 GPU. The Cortex A75 will cater towards performance intensive needs, which the A55 will be geared toward the middle end bracket and complementing the A75 in big.LITTLE designs.

We've also got some benchmarks that compare the A75 with its predecessor, the A73. And according to ARM, the gains are massive. Starting from GeekBench 4, the Cortex A75 gains 1.34x over its predecessor. The company claims that the Cortex A75 offers up to 20% gains over the A73. However, we can't make any concrete conclusions unless workable units of the designs are available for testing.

Talking about the Cortex A55, it's geared towards performance and power efficiency. According to ARM, the A55 will provide twice the performance when compared to the A53. It will also be 15% power efficient and allow greater scalability. ARM's benchmarks suggest a 1.2x performance gain over the A55 for GeekBench 4 results.

Moving on towards the Mali G72, the GPU will focus towards future trends. The GPU will offer 1.4x the performance when compared to 2017 devices. It will also be geared towards Machine Learning and VR - both of which will develop considerably in the coming years. It's the Mali lineup which requires attention from ARM's end, as the manufacturer's solutions are consistently outdone by Qualcomm's Adreno lineup. Thoughts? Let us know what you think in the comments section below and stay tuned. We'll keep you updated on the latest.