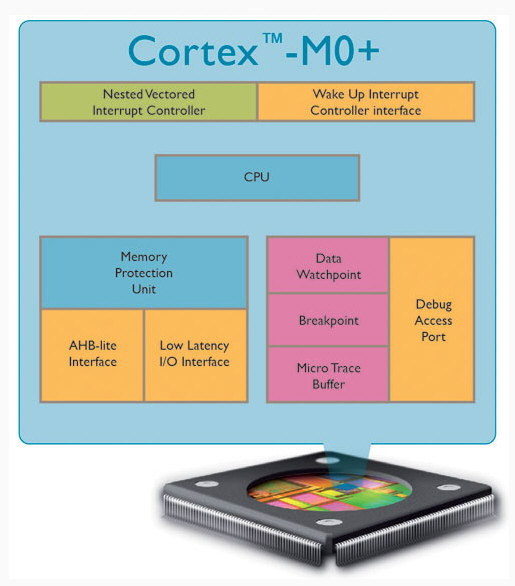 The 32-bit Cortex-M0+ processor, the latest addition to the ARM Cortex processor family, consumes just 9µA/MHz on a low-cost 90 nm LP process, around one third of the energy of any 8- or 16-bit processor available today, while delivering significantly higher performance.

This industry-leading combination of low power and high performance provides users of legacy 8- and 16-bit architectures with an ideal opportunity to migrate to 32-bit devices, thereby delivering increased intelligence to everyday devices, without sacrificing power consumption or area.

The Cortex-M0+ processor features enable the creation of smart, low-power microcontrollers to provide efficient communication, management and maintenance across a multitude of wirelessly connected devices, a concept known as the 'Internet of Things.'

This low power connectivity has the potential to enable a range of energy-saving and life-enhancing applications from sensors to wirelessly analyze the performance and control of domestic or industrial buildings, to battery-operated body sensors wirelessly connected to health monitoring equipment. Current 8-bit and 16-bit MCUs lack the intelligence and functionality to deliver these applications.

"The Internet of Things will change the world as we know it, improving energy efficiency, safety and convenience," said Tom R. Halfhill, a senior analyst with The Linley Group and senior editor of Microprocessor Report. "Ubiquitous network connectivity is useful for almost everything - from adaptive room lighting and online video gaming to smart sensors and motor control. But it requires extremely low-cost, low-power processors that still can deliver good performance. The ARM Cortex-M0+ processor brings 32-bit horsepower to flyweight chips, and it will be suitable for a broad range of industrial and consumer applications."

The new processor builds on the successful low-power and silicon-proven Cortex-M0 processor which has been licensed more than 50 times by leading silicon vendors, and has been redesigned from the ground up to add a number of significant new features. These include single-cycle IO to speed access to GPIO and peripherals, improved debug and trace capability and a 2-stage pipeline to reduce the number of cycles per instruction (CPI) and improve Flash accesses, further reducing power consumption.

The Cortex-M0+ processor takes advantage of the same easy-to-use, C friendly programmer's model, and is binary compatible with existing Cortex-M0 processor tools and RTOS. Along with all Cortex-M series processors it enjoys full support from the ARM Cortex-M ecosystem and software compatibility enables simple migration to the higher-performance Cortex-M3 and Cortex-M4 processors.

Early licensees of the Cortex-M0+ processor include Freescale and NXP Semiconductor.

"We're excited to further strengthen our relationship with ARM as a lead partner in the definition, and first licensee of the smallest, lowest-power ARM Cortex-M series processor yet," said Dr. Reza Kazerounian, senior vice president and general manager of Freescale's Automotive, Industrial & Multi-Market Solutions group. "The addition of products built on the Cortex M0+ processor will make our fast-growing Kinetis MCU line one of the industry's most scalable portfolios based on the ARM Cortex architecture. With the ability to reuse code, higher performance and improved energy efficiency, the Cortex M0+ processor will enable designers to transition from legacy 8-bit and 16-bit proprietary architectures to our new Kinetis devices, without sacrificing cost and ease of use benefits."

"NXP is the only MCU vendor to have adopted the complete ARM Cortex-M processor series, and we're excited to be able to add the Cortex-M0+ processor to our portfolio," said Alexander Everke, executive vice president and general manager of High-Performance Mixed-Signal businesses, NXP Semiconductors. "We have already proven the success of our Cortex-M0 processor portfolio with over 70 part types shipping in high volume today, this new Cortex-M0+ processor further accelerates our momentum into the 8/16-bit market."

"The Cortex-M0+ processor is yet another demonstration of ARM low-power leadership and its commitment to drive the industry forward towards ever lower power consumption," said Mike Inglis, EVP and GM, Processor Division, ARM. "With our expertise in low-power technology, we have worked closely with our Partners on the definition of the new processor to ensure that it can enable the low-cost devices of today, while also unlocking the potential benefits delivered by the Internet of Things."

The Cortex-M0+ processor is ideally suited for implementation with the Artisan 7-track SC7 Ultra High Density Standard Cell Library and Power Management Kit (PMK) to fully capitalize on the ground-breaking low power features of the processor.