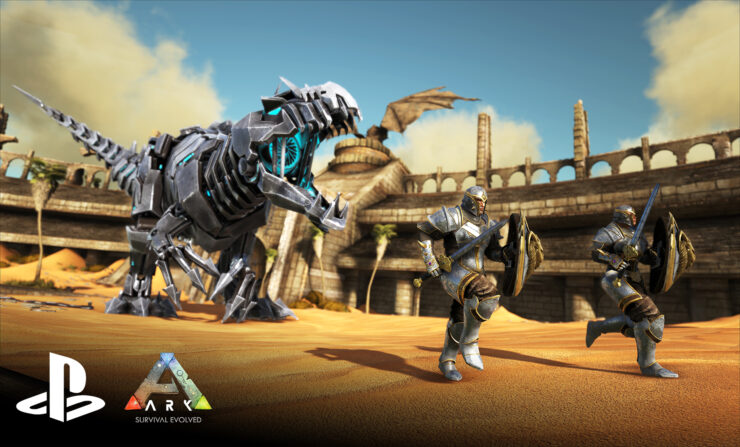 Originally debuting on PC, the online survival game has already made its way to Xbox One and PlayStation 4 players can now get in on the dino-fighting action. ARK: Survival Evolved has players wake on a mysterious island where you have to work together find resources and survive. To make matters worse, the island is full of deadly dinosaurs and other players who mean to do you harm. Wildcard partnered with studio Abstraction Games to help porting the game over to Sony's console.

Playstation 4 Pro owners will get an improved experience thanks to a higher framerate, smoother animations and added visual effects.

Jeremy Stieglitz, co-founder of Studio Wildcard, broke down what PlayStation 4 owners can expect:

In the weeks and months ahead you can expect some dramatic new additions to the Ark, including a complete redesign and expansion of the underground cave systems; a whole new Tek Tier of weapons, structures and items; an expanded menagerie of wondrous creatures; further increased game performance and optimization; per-pixel canvas painting; infinite customizable Procedurally Generated Arks; new systems such as hair customization and the “Ascension” end-game cycle; and limited-time holiday events & cosmetics.

This means that PS4 owners will be getting a steady stream of updates with new items, enemies and game mechanics up until the game finally releases in Spring 2017. In case you forgot, ARK is still technically in Early Access on PC and in Game Preview on Xbox One.

ARK: Survival Evolved is out now on PlayStation 4. The Survivor's Pack will include ARK: Survival Evolved and the expansion pack, Scorched Earth for $54.99; you'll also find a Playstation 4 exclusive Bionic Gigantosaurus and the Manticore armor set (available for both genders).