ARK: Survival Evolved To Get Meaty Expansion Shortly After Release

Fans of ARK: Survival Evolved will probably be interested to know that the dinosaur themed survival game will get a substantial expansion soon after its release. 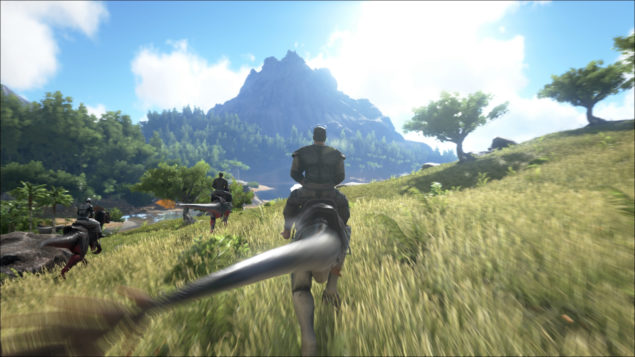 And we are also starting soon on our expansion content, which is lots of extra gameplay hours and story extensions on top of the main game. We’re going to be developing that, starting soon, so that a few months after release we have a first expansion of Ark to go out and people have a big chunk of new content. We may iterate with that content in an early access-type way, with the community before we launch it. That’s something that we talk about; having an early access for DLC rather than just the game, because we get so much out of that with the back and forth with the community.

Earlier in the interview, Rapczak also mentioned that the incredible pace of updates for ARK: Survival Evolved is about to slow down as the team locks content for the upcoming release.

There’s definitely a finish point. Our pace of updates will slow down a lot as we get towards release, as we don’t want to be iterating on new stuff as we try to polish the game.

But to answer your question, we’ll see a slowdown. We have a target around the beginning of next year to start locking down and doing a formal alpha and beta period with the game, so that we can ship and really open up our options for release. We don’t want it to be one day we release, and we just turn a switch and people are like, ‘Wait a minute!’ We want there to be a definite exit to early access and then release a very polished game.

It’s important for us to get there because we want to set an example about how early access is a very important part of development these days. It shouldn’t be the state of the game, permanently. It should be: work on the game get it to a point where it’s ready for an early access phase; be early access for a set amount of time that you’ve planned for; and then polish up and finish the game after that.

I think the way that early access has kind of got a stigma with some games is because early access has no end and games stay there for multiple years. And some games are really good about it, but then some games sort of fall off the radar. It has this stigma of, ‘maybe it finishes, maybe it doesn’t,’ and we don’t want to be in that boat. We want everybody to know for sure that this will be a finished game at some point.

Honestly, these words are music to my ears. While I understand the purpose of Steam Early Access, a few games have abused this system and have been purchasable for years without any sign that they will resemble a polished game any time soon.

ARK: Survival Evolved is aiming to fully launch on Steam, PlayStation 4 (with Project Morpheus support) and Xbox One by June 2016, exactly one year after it released on Early Access. Hopefully that DirectX 12 patch is coming a lot sooner though - the game is gorgeous, but also taxing and an extra 20% performance is just what we all need.