ARK: Survival Evolved has been consistently at the top spot of Steam's top selling games since its debut on Steam Early Access. The game, a dinosaur themed survival game released in June in order to coincide with Jurassic World's theatrical launch, has been updated very often by Studio Wildcard with fixes and even new features such as modding tools (via Unreal Engine 4). 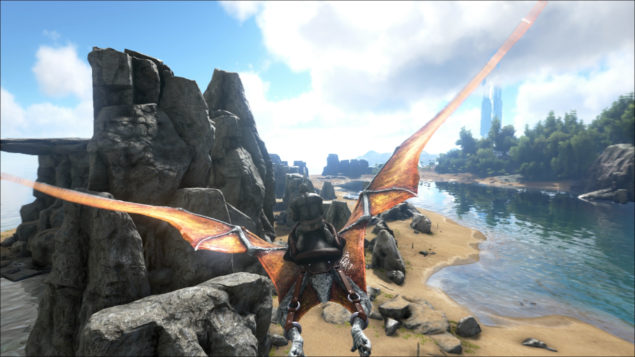 Another update is on the way this Friday and it will be particularly significant. In fact, Windows 10 users will enjoy DirectX 12 support which should reward them with a 20% performance boost while playing ARK: Survival Evolved, approximately. Of course, we'll investigate this thoroughly after the controversy surrounding the Alpha build of Ashes of the Singularity.

Other additions due in two days are a new creature called Mesopithecus and smoke grenades. Here's a roadmap for more features & fixes scheduled to be introduced soon:

- Collidable Saddle Platform & Build-on-Saddles: make your big brontos and plesios into mobile bases, build just about anything up from them! Build ladders to climb up onto them, whatever -- the possibilities are nearly endless!!! We originally were gonna limit it to sleeping bags and turrets, but let's just go all-out and make it work with everything.

Let's take a step back now, since a new dinosaur has been added in ARK: Survival Evolved only a few days ago. It's the Doedicurus, which is described by the developers as follows:

The Armadillo-like Doedicurus is a handy creature to have in your stables, as it can efficiently harvest stone on an industrial scale. It also has tremendous defensive protection via its hard shell, to which it will retreat if threatened. Most importantly, when riding it, you can enter “shell-charge” mode and roll through the ARK as a hardened, nearly indestructible ball… similar to a certain blue rodent! This ability is great for rapidly closing the distance towards enemies, or just plowing through them like a bowling ball, making the Doedicurus fun for the whole tribe.

They also shared a short video about it.

ARK: Survival Evolved's full release is planned for June 2016 on Steam, Xbox One (via ID@Xbox) and PlayStation 4; the game also takes advantage of Oculus Rift and Project Morpheus, just in case you really want to feel like you're back in the Jurassic era.

The Big ARK: Survival Evolved Interview – Launching and Beyond