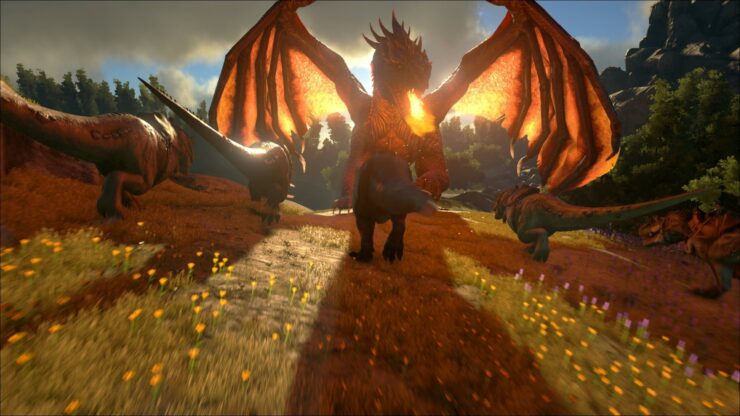 We got the chance to sit down with Studio Wildcard’s Co-Founder and Co-Creative Director Jesse Rapczak last week, just after he spoke at the PC Gaming Show. Kai Powell, our editor at E3, talked with him about ARK: Survival Evolved, arguably the most successful survival game on PC and Xbox One. Enjoy!

What can you tell us about the storyline that will be introduced with the full launch of the game? How many hours will it take for players to get through it?

With the new biome we're putting out the first of our ruins throughout the world. They don't have any gameplay impact quite yet, but the story of ARK is kind of going to be experienced via exploration, there's things people can uncover in these ruins around the world. It's not a linear story, rather it echoes the sense of exploration and discovery in the game. It kind of gives you the point of view of survivors that have been there previously, giving you some clues as to what's going on.
We're not exactly sure yet about how long it would take to get all the clues, but the thing is, they're also going to be randomized per server in terms of locations. Right now we have 200 ruin locations. It depends on how much time you devote to exploring and finding all the corners of the map.

Can you tell us about how the "procedurally generated ARKs" will work and what your goal is with this feature?

With that we're trying to extend the longevity of ARK and make stuff a little bit more random. Once the game launches, the ARK is probably not going to change much - we're going to have various expansions and things that will be new experiences, but with the procedural generation in every server you go it'll be slightly different. I think it's going to break up things a little bit, give players more variety in the long term.

The Tek Caves/Boss Wars/Ascension Game Progression bullet point on the do list is intriguing. Any details you can share about these upcoming features?

Those are endgame features that we're still tweaking around. Some of those may come later in development, maybe when the game fully launches, so we still want to keep some things under wraps. One thing I can tell you is that we're thinking about letting bosses come back in the main game mode and really letting them impact the gameplay there.

You mentioned that some of the Xbox One optimizations will make their way onto PC. Can you go into some more specifics about this? Will this help high end configurations too or just lower spec machines?

Xbox being a console lets us find little tricks and hacks to help the performance. Since we're very focused on getting the game to run well on consoles, we realized a lot of those savings could come back and help us on PC. One example is that we recently changed the way we render all of our forests to get the game running better on Xbox, that's a change that we'll bring back to PC to really enhance the performance there. A lot of that stuff will continue through the product launch, because Xbox and PC are going to be expanding what our team does in terms of optimization. We also have server optimization anyway, which we've been doing recently as well. That helps Xbox and comes back to PC.

DirectX 12 is still listed as coming to Windows 10. Could you give us a time frame for when this will be available? Also, are you still targeting a 20% performance boost on average?

We get this question all the time because people really want to see DirectX 12. When we started working on DirectX 12 we realized that this stuff is not quite ready for prime time yet. Not because of the technology, but because of the industry adapting to this technology. That's in terms of hardware, software, engine etc.
We didn't want to get into that rat's nest of optimization. We still want to get DirectX 12 out there, we just don't want to be the first ones to do it. It's not really directly related to gameplay anyway and we do have our own optimization to make first. We do plan to implement DirectX 12 once it becomes more widespread, once more developers start using it (especially UE developers since we're on UE4). We don't want to have to go and make engine changes. We'll be motivated to implement it when it's clear that it's going to provide a net benefit for all of our users.
We're also keeping our eyes on technologies like Multi-Res Shading, that have been designed for VR but can also be useful for non-VR games.

Are you considering support for the Vulkan API?

I think as a studio - we're not really Unreal Engine, we're more of ARK Engine at this point because we've made some many changes - we want to take a hard look at Metal and Vulkan so that Mac & Linux can get experiences as good as possible when compared to the PC version.

We know that you previously talked about a PlayStation VR version. However, we noticed that it recently disappeared from your press releases - is ARK still coming to PSVR and if so, which frame rate are you targeting and what kind of differences will there be with VR on PC?

We haven't really changed our plans for PSVR, we're still planning to do that. We should be announcing some stuff pretty soon, with PSVR getting close to launch. We definitely want to be part of all the good stuff happening there.

Speaking of the console releases, what kind of frame rate/resolution are you targeting for the final launch on PlayStation 4 and Xbox One?

Right now our goal is just higher resolutions. We're pretty low on Xbox One right now, but we hope to bring that up at least at 720P. People generally think that PlayStation 4 is more powerful and on paper you can think that, but it has its own challenges. You'll see some developers saying that the two systems are basically the same, because each have their own set of challenges. Definitely the PS4 has a little bit more graphical horsepower, but generally our game is not just graphically bottlenecked on consoles because we also have a lot of CPU calculations (especially when playing in single player).

Do you still plan to fully launch ARK: Survival Evolved within 2016?

We're still shooting for a Winter launch. We don't know the final date yet as it depends on certification, we are still planning to launch simultaneously on all platforms.

What's in store for the game after the launch? Do you plan to add content on a regular basis and if so, will it be paid or free?

In the future, we're definitely planning to have expansions to the game that are premium and a lot of free content as well. We'll continue to push free updates after launch. You can expect our premium content to have a lot of value, with many additional hundreds of hours of gameplay.

Subnautica Review – The Abyss Gazes Back Into You