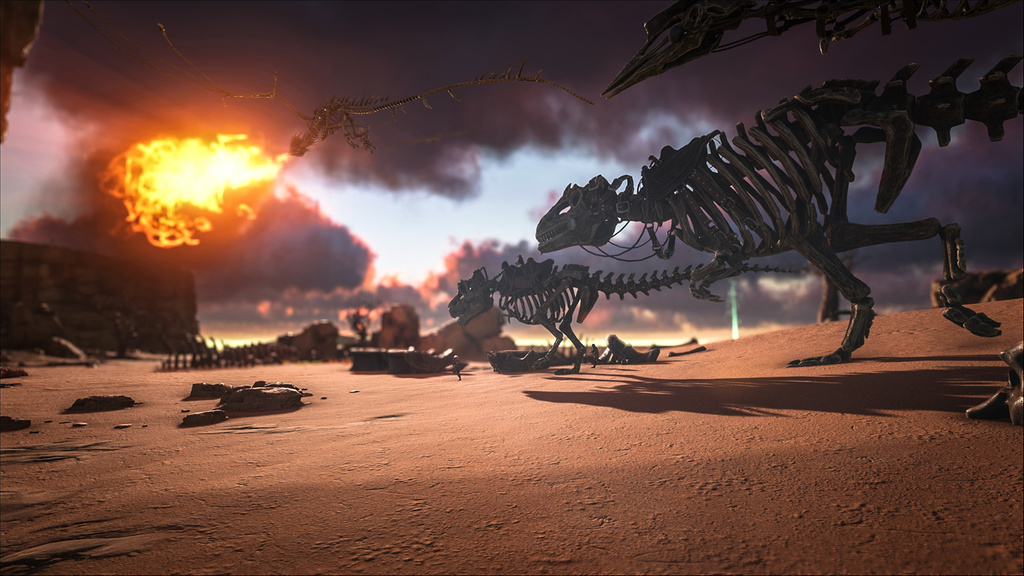 It's that time of year again. The Dead are back in the Ark: Survival Evolved Halloween event that drastically changes the already dangerous world into Halloween nightmare land.

Starting today, Fear Evolved 2 will transform ARK into a creepy land filled with zombies, pumpkin patches, scarecrows and graves. Expect to see (and most likely run away from) zombified versions of the Gigantosaurus, Quetzalcoatlus, Jerboa, Wyvern (among others).

The trailer shows a ton of new content ranging from scary clown masks to the horrifying DodoRex that's looking to snack on you. Fans did show some concerned that some content is missing from the Fear Evolved 2 update.

Studio Wildcard addressed the issues that Fear Evolved 2 does not contain some of the content promised:

In regards to some of the missing Halloween content, unfortunately we weren’t able to deliver on what we had intended to do for this holiday release. Both Jeremy and Jesse (the founders and captains of our team) had to unexpectedly take care of some work out of the country which affected the development and release, as well as the content we were hoping to provide. The special attributes/effects related to Werewolves and Vampires will not be a part of this holiday event. We are hoping to be able to release these special effects in a future event, as we understand a lot of players were looking forward to experiencing it.

We always try to include everything that mention in the patch notes and sometimes things occur outside of our control, in this case it was losing two star players - going forward we’ll be working hard to ensure that our Christmas Holiday patch will have a simultaneous release across all platforms, and include the content we intend for it - there’s a lot to look forward to and we’ll do our best to make it up to you guys!

We sincerely apologize for any inconvenience and disappointment caused by the missing content on PC. We understand the frustrations but we do hope that you enjoy the rest of the Fear Evolved Patch.

Fear Evolved 2 runs from October 28th to November 6th in ARK: Survival Evolved that's playable on PC (Steam Early Access) and Xbox One (Game Preview). This is following the massive V248 update that hit the game last week. ARK: Survival Evolved is currently on sale for 50% off during this Halloween Event (I'm sorry, I meant Dino-ween event) and even its Scorched Earth expansion can be purchased at 30% off during the period.