Arctic, a cooling company known for being able to provide good value for the dollar for both CPU and GPU coolers, have released a new cooler that makes some marked changes to the traditional on-board fan controller.

Zero-Idle and passive cooling capable i32 and A32 keep things quiet under typical loads.

The cooler itself is aluminium with four total heatpipes that go vertically through the horizontally set fins. It's being touted as lighter and even somewhat smaller than it's predecessor, the i30/A30. The real innovation, however, is in the new fan, dubbed the F12 PWM.

The new F12 PWM is a 120mm fan that has a specially designed fan controller that leverages a zero-idle mode where the fan will only speed up and turn on should the temperature reach a certain level, or until the load starts increasing. What that level is or what temperature, however, isn't known at the moment. 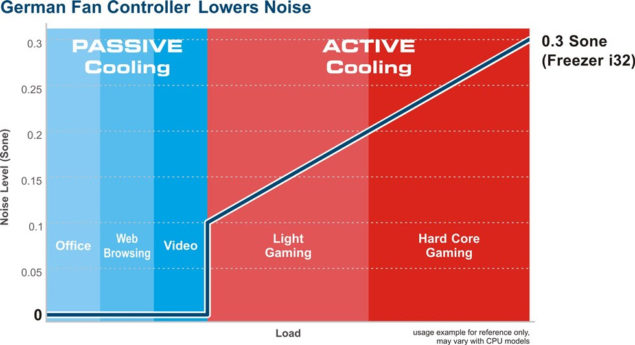 They're also releasing a model that has a special dual ball-bearing fan to be used in 24/7 continuous operation environments, perhaps in enterprise or other server environments considering the relative size.

In the past, Arctic has been able to provide some very compelling CPU options for very little money, being a good choice for the value segment without actually sacrificing much. That and their GPU options have generally been very well designed, allowing even a Titan X to overclock quite well. This doesn't necessarily seem to appeal to the hardcore gaming enthusiast, but nonetheless is a good option for a cool and quiet workstation.