NVIDIA's flagship GeForce GTX Titan X graphics card launched earlier this week at GTC 2015 featuring stellar performance and a really high cost which is expected from the Titan series of graphics cards. While the card performs well, NVIDIA has restricted Titan X to just reference variants which means that AIBs are not allowed to manufacture custom cards that make use of better PCBs or coolers however some AIBs and partners have launched waterblocks for the cards (EK Waterblocks, EVGA) along with air coolers which can be paired on top of a reference PCB. 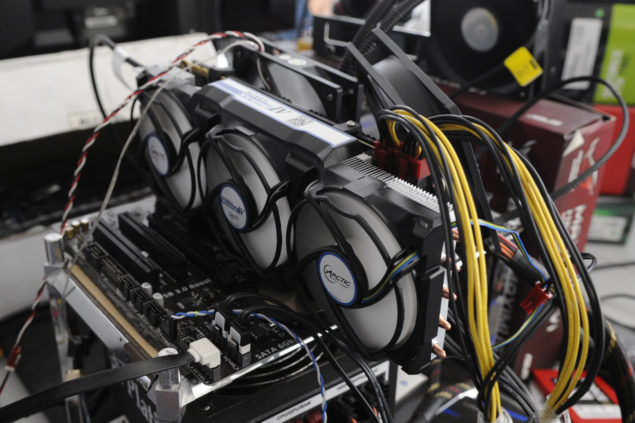 ARCTIC being a major manufacturer of air and hybrid coolers did release the Accelero Xtreme IV a while ago for the latest Kepler and Hawaii cards launched at the moment but PCGameshardware has managed to pair it up with a GTX Titan X, even though there's no mention of the card in the compatibility list. Along with the cooler, the site also managed to grab a BIOS mod from overclock.net which removes all the power limitations on the GM200 chip added by the original BIOS stored on the card and pushes the power target to a maximum of 121% that can push up to 425 Watts of power to the core as compared to the reference wattage which is around 350 Watts with a 100% percent target range. The other change is the voltage which is up to 1.281V compared to the reference 1.025V at which the card operates at the reference boost clock of 1088 MHz.

What's the difference the cooler and BIOS makes? The card is pushed to an absolutely crazy 1550 MHz core and 8002 MHz memory clock, both of which are perfectly stable. We know that the Maxwell core architecture tends to overclock really well but does the thermal aspects of the card stay under control since the  reference GeForce GTX Titan X does gets quite a bit hot with its thermal threshold set at 91C which reveals that the card will throttle clock speeds past that limit and overclocking the GM200 does put out a lot of head. As expected, the ARCTIC Accelero Xtreme IV performs great with its 84-fin heatsink with 5 copper heatpipes which comes pre-applied with MX-4 thermal compound and is cooled down by three 92mm PWM controlled fans which allow upto 300W of cooling performance.

In terms of temperatures, the card runs at just 56C while playing Anno 2070 and 113% GPU utilization, 43C in Crysis 3 with 91% GPU utilization and 50C in Watch Dogs with 91% GPU utilization. This goes off to show that with a little custom cooling (ARCTIC's cooler can be bought at around $89.95), you can have your Titan X run at faster clocks and much better temperatures when playing games on overclocked frequencies. Currently, the GeForce GTX TItan X is NVIDIA's top end graphics card but they are expected to launch a cheaper card based on a similar or cut-down GM200 soon. 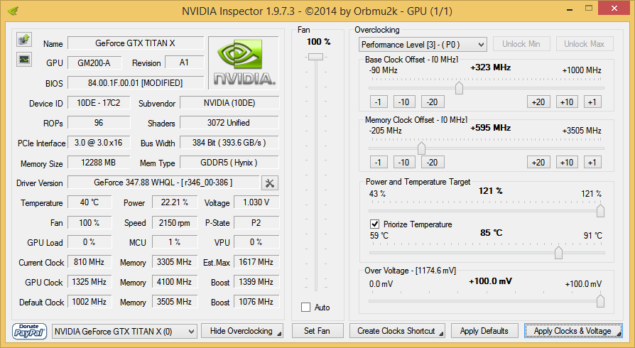