Back in June, we heard that Apple was putting its interests in dual-camera technology in its upcoming devices. Since Apple files a lot of patents, it looks like the dual-camera system is where Apple is putting some serious attention. Moreover, later in 2015, a report surfaced that Apple might implement the dual-camera technology in its forthcoming iPhone 7. Now, the Cupertino based company has yet filed another patent that silhouettes the Apple's plans for its future devices.

The patent was published by United States Patent and Trademark Office recently, outlining how the dual-camera technology can be implemented with an optical zoom. Behind the lens, Apple plans to install two individual camera modules which would ultimately create a single lens that utilizes a standard section and telephoto. This will allow users to choose a focal length whenever they want. The main objective of this technology would be to capture a zoomed photo without sacrificing the image quality.

Since the launch of iPhone 5, users have been able to take photos while recording a video. However, the image resolution was lower compared to the recorded video. With dual-camera system, users would be able to take a photo while recording video without sacrificing the resolution. Henceforth, it might be of great importance to those who use this feature. Both rear facing cameras would harness maximum resolution, enabling users to capture high resolution photos as well as videos. 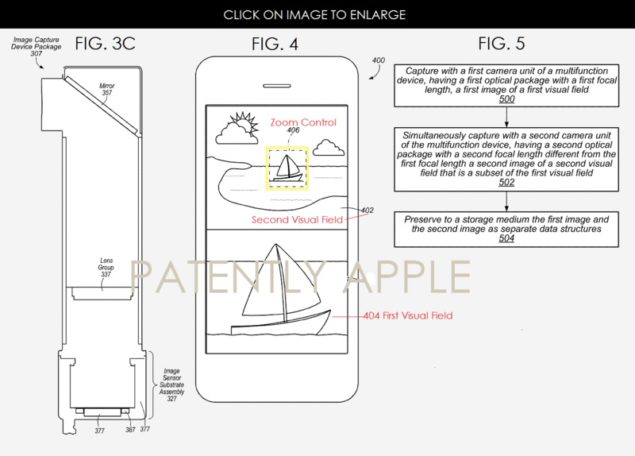 Furthermore, Apple emphasizes on how iMovie could blend the photo and video together automatically into one single file.

The editing further heats up with Apple suggesting that the camera would be capable of taking 1080p video, 4K video, slo-mo video and still pictures, all of which can be conjoined together later on. Ultimately, this will allow users to record a standard video and then use the secondary lens to zoom on a specific object to get more details in the frame. Moreover, users would also be able to take a slo-mo video at the very same time.

Apple's dual-camera technology may revolutionize smartphone cameras in the near future if Apple plans to implement it. Do you guys think the dual-camera system will be implemented in the iPhone 7? Share your thoughts in the comments.