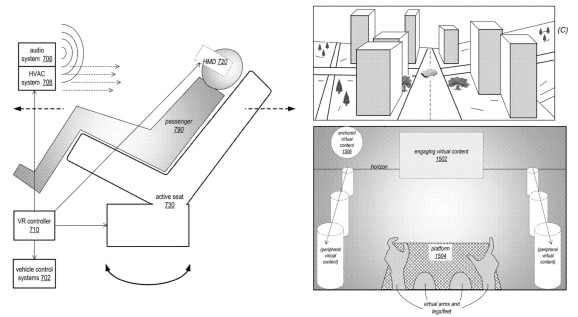 Apple files a boatload of patents and it is not necessary that each patent would result in a new product. Apple could have numerous uses for its patented technology. While sometimes it incorporates the technology into older products, other times it just patents something so rivals won't be able to get their hands on it. Whatever may be the reason, we remain hopeful for it as it depicts the direction the company is headed towards. Apple's new patent details the application of putting VR systems in autonomous cars. So let's check it out in a little more detail.

The original patent application was filed by Apple back in September of 2017 and published under the United States Patents and Trademark Office or USPTO this week. If the patent is to be taken any seriously, it seems that Apple might have tweaked the idea of implementing the VR technology inside autonomous cars. The application was first reported by VentureBeat.

The purpose of the patent that Apple is looking to achieve is to counter motion sickness. The patent is meant to “address problems with vehicles in motion that may result in motion sickness for passengers”. So Apple will create a virtual environment above the real world to avoid that.

“Passengers may choose to have relaxing virtual experiences … such as floating down a river or soaring over the landscape in a hang glider, or exciting virtual experiences such as a car chase or driving through a post-apocalyptic wasteland with zombies attacking … if the vehicle stops at a red light or for some other reason when fleeing zombies … the virtual experience may cause the vehicle to appear to stall and not allow the car to be restarted until the light turns green to build suspense.”

The patent also mentions a controller and a projection mechanism which will allow animated videos to be displayed on the windows of vehicles. There will be several extended applications to it. Other than this, the VR system in autonomous vehicles will allow for handling meetings with avatars positioned around the tables.

There are some other activities part of the patent as well, so do check it out. There will be more to the story, so be sure to stay tuned. This is all for now, folks. What are your thoughts on the new Apple patent? Does it sound applicable? Share your views in the comments.