Many users have reported issues regarding Apple services, and the company has officially updated its service status page in response to those complaints. A lot of users have dropped complaints against failure to purchase digital products from the company's various stores, including the App Store, Mac App Store, iTunes, and more. In the service status page, Apple clearly notifies users that ''services may be unavailable for some users''. 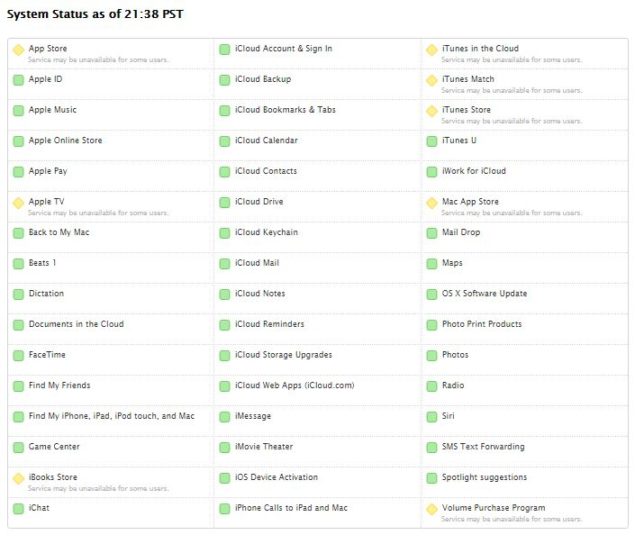 App Store, Mac App Store, iTunes And Other Services Down

The outage is preventing users from making online purchases of various digital products. In some cases even streaming music from iTunes in the cloud is being difficult or impossible. Apple's system status page lists Apple TV, App Store, iTunes in the cloud, iBook Store, iTunes Match, iTunes Store, Volume Purchase Program, and the Mac App Store as the potential victims of the outage, as they might not be available for some users. All of the aforementioned Apple services report in the yellow, stating that some users have no access to them.

Users first started facing issues before 7:00 a.m Pacific. The issue seems to have dispersed, affecting a huge customer line in some regions. Some of the affected regions include Canada, United States, Europe and other areas as well. According to Apple, the issue prevailed just over an hour ago and for some users, purchase of digital content or products might not be possible at the moment.

“All Store Services – Some users are affected
Users may be unable to access the above stores/services or make purchases.”

It also appears to be that some iCloud services have also been a victim to these outages last evening. We are keeping an eye out for any improvements in the situation. Apple cautions customers, “Users may also have been unable to use multiple services at iCloud.com.” It could be that these are minor issues in Apple's services and might be fixed soon. It is just a matter of time when Apple steps forward and removes any hiccup from the system and normalize its service stores.

Are you experiencing any service store issue at your end? Have you been a victim of the iCloud issues this morning as well? If you are, then you can report to Apple through their support page. Do mention if you have any other issues regarding the matter as well, so the whole community can benefit from it.

This is it for now, folks. What are your thoughts on the matter? Vent your frustration in the comments section below.