Ever since Apple broke records by shipping 230 million iPhones, the company is struggling to maintain momentum. A maturing high-end smartphone market combined with the excellent build quality of Apple's iPhones has ensured that users are taking longer to upgrade. This naturally does not bode well for the company, as it has to wait for products and revenue streams to mature.

While we're sure Apple's board wouldn't mind this, a publicly traded company is driven by investor demands. These demands often conflict with what is realistically achievable in a market. Today we've got a report for Apple's iPhone shipments in 2019's first quarter from Canalys. Head over below for more details.

Before we get started, it's important that you keep a subtle distinction in mind. Canalys' data refers to 2019's first calendar quarter. This is equal to Apple's second fiscal quarter for 2019, for which the company posted earnings yesterday. Things aren't looking good for Apple suggests Canalys' data. According to the research firm, shipments in the smartphone industry are at their lowest in five years, and Apple's been hit particularly hard by this.

The numbers suggest that current shipments for the global smartphone market stand at 313.9 million units, and five major players dominate the market. These are Samsung, Huawei, Apple, Xiaomi and Oppo respectively. Out of the five, Apple has witnessed the largest decline in smartphone shipments annually. The Cupertino tech giant's iPhone shipments stood at 52.2 million in Q1 2018. They now stand at 40.2 million units, in what is a 23.2% decline. 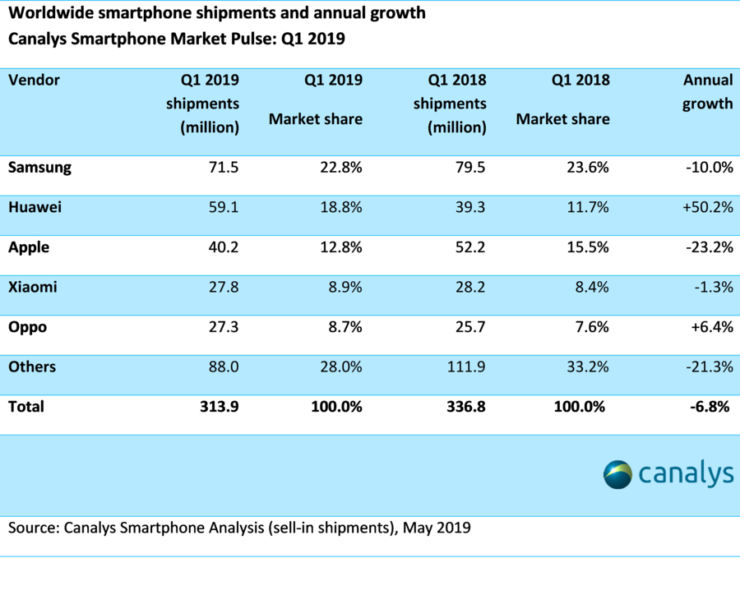 Apple isn't the only one who has suffered, as Samsung's shipments have also decreased by 10% over the year. Chinese smartphone brands are doing well though - except Xiaomi. While it was Xiaomi who first introduced well-designed smartphones in the market, so far it's Huawei who's rising. While Samsung is struggling, Huawei's mobile shipments grew by a staggering 50% in the twelve months that have passed between Q1 2018 and Q1 2019.

However, not all is lost for Apple. Analyst Ben Stanton corroborated Tim Cook's claims that demand of the iPhone picked up during the last six weeks of the previous quarter. According to Mr. Cook, price adjustments, reduced VAT, improved US-China dialogue and a healthy response to Apple's trade-in programs are the reasons behind this improvement. Of course, the main thing to observe this quarter is whether the trend will stay or whether it's a one-off occurrence.

Whatever the case is, Apple's situation for the iPhone will not improve unless the company makes serious efforts towards introducing new features on the smartphone. Whether it will, only time can tell. Till then, stay tuned and let us know what you think in the comments section below. We'll keep you updated on the latest.