Apple's iPad Pro has seen its fair share of images, leaks and news over the past couple of months. Well, Martin Hajek is back again, this time with renders of how the iPad Pro will end up looking in his opinion. 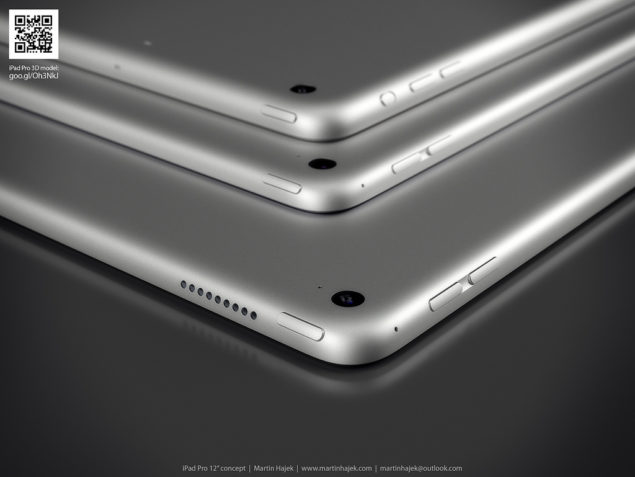 As compared to Mini 3 and Air 2, iPad Pro consists of a larger bezel. However, the design is pretty much similar to iPad Air and iPad mini Retina, a flat back and modish curved corners. Other changes in iPad Pro include addition of speaker holes both on top and bottom. Speakers are also well placed on right and left of the lightening connector. This will no doubt offer a crisp, sharp and loud sound to the users.

Would you like a stylus with iPad Pro? Latest rumors suggest that Apple will offer a stylus accessory to be used with iPad Pro. We all know that, originally iPads weren’t designed to include a stylus. However, now with this accessory’s release, enterprise and creative users will be the ones getting most of the benefit. Given that a stylus is more accurate than person’s fingers, it can be more expedient to use rather than a grouping of mouse and keyboard in some cases. Hence, we deem Apple’s stylus will enhance users’ experience of this 12.9 inch device. Sources  believe that, users won’t needing a stylus primarily anyways. Coupled with its unfriendly price tag, a lofty selling price may turn customers off if it gets bundled with the 12.9 inch iPad.  Notably, stylus won’t possibly feature an innate gyroscope, an ingenious count that would have made the software hand writing acceptance an appealing add-on.

Coming towards the specs of iPad Pro, it will pack in a 12.9 inch wide screen with 3072x2304 pixels and a 4-K solution backed with IPS technology and LED backlights. In a nutshell, though, the iPad Pro is much wider than its predecessors but it is as thinner as Apple’s portent flagships. Tell us what you think about the inclusion of bezel and stylus in iPad Pro. We will keep you updated in the meantime.