How To Install The New Apple Watch Software Update 1.0.1

Today marks a milestone in the life of the Apple Watch, with its first software update now rolling out to users. Here, we take a look at some of the new features Apple has added, as well as guiding you through the steps to getting it running on your Watch.

It's going to be a while before we see whether the Apple Watch has what it takes to go the distance. Like the iPad, iPhone, and so many other major Apple releases before it, the device has a considerable number of doubters, but between now and the second-generation smartwatch out of Cupertino, these software updates will be critical to the overall experience.

With Watch OS 1.0.1, Apple seems to be channelling its efforts into fine-tuning the experience. As is to be expected, the first few weeks of Apple Watch's existence have not passed without one or two niggling bugs, but today's update should put many of them to bed. 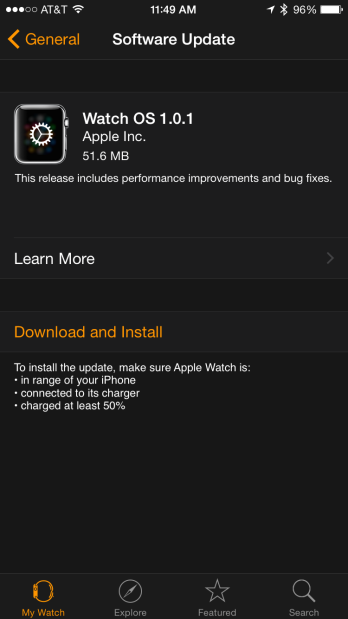 The change log mentions an abundance of fixes relating to the performance of the Siri voice assistant, and if you're also interested in the Watch's health and fitness-related effects, some adjustments have been made there, too. From "measuring stand activity" and "calculating calories for indoor cycling and rowing workouts" to measuring "distance and pace during outdoor walk and run workouts," this update puts the device in better sync with the more active Apple Watch community, but it's not all about sweating it out and exercise.

If your idea of getting the most out of your Apple Watch is through communication with others, then you will surely welcome the support for the new emojis featured in iOS 8.3. For whatever reason, we cannot get enough of these cute-yet-funny-yet-annoying little images, and if you've been enjoying the fresh batch supplied with the last public iOS update, Apple Watch is now included as well. 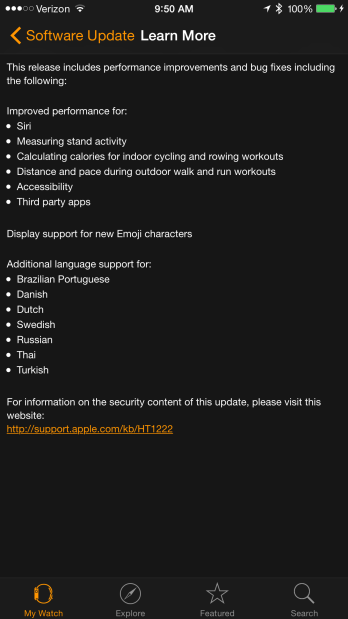 There's also support for a bunch of new languages with Watch OS 1.0.1, including Brazilian Portuguese, Danish, Dutch, Swedish, Russian, Thai, and Turkish. This won't mean a great deal to the vast majority of those living in these countries, however, since Apple has not yet made the device available to any of those nations. Tim Cook mentioned at the recent earnings call that the second wave of shipments should begin in June, but whether or not this is still on the cards is anybody's guess.

How to Install the Apple Watch software update

If you'd like to update your Apple Watch, you can do so by opening up the companion app on your iPhone and going to Settings > General > Software Update. Your connected Apple Watch will need to be placed on charge throughout the updating process.

Let us know if you discover any quirky new features in the new Apple Watch software update by commenting below.