Apple has released the much-awaited iOS 8.1 today for iPhone, iPad, and iPod touch. The update comes packed with new features and more importantly, fixes for the plagued iOS 8 and its following iterative updates. 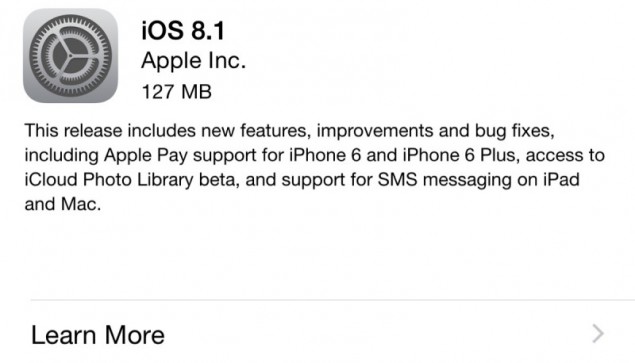 iOS 8.1 Includes Several Bug Fixes And Comes With Apple Pay On Board.

Apple has started seeding out iOS 8.1 to public. The update brings the notable feature of Apple Pay which is being considered as one of the biggest highlight of the year. Apple Pay was expected to launch with iOS 8, however, Apple held up the feature for a later date. Apple Pay is Cupertino's NFC based mobile payment system that was announced at the iPhone 6 and 6 Plus unveiling. Apple Pay enthusiastically believes to turn decades' old card-based payment system obsolete.

Apart from the inclusion of Apple Pay, iOS 8.1 packs bug fixes and performance improvements which hopefully would make the crappy performance iOS 8 a tad better. iOS 8 release was followed by a ton of complaints coming from consumers as the update was plagued with some major issues. iOS 8 was then quickly followed with iOS 8.0.1 update which rather than fixing the issues, as you would expect, brought in even more. It was the first update which Apple actually had to pull back due to the problems it was causing to the users. Apple finally released iOS 8.0.2 fixing many issues with the earlier builds, now followed by the much stable iOS 8.1.

The complete changelog for iOS 8.1 is as follows:

Apple Pay support for iPhone 6 and iPhone 6 Plus (U.S. only)

Messages includes new features, improvements and fixes
- Adds the ability for iPhone users to send and receive SMS and MMS text messages on from their iPad and Mac
- Resolves an issue where search would sometimes not display results
- Fixes a bug that caused read messages not to be marked as read
- Fixes issues with group messaging

Accessibility improvements and fixes
- Fixes an issue that prevented Guided Access from working properly
- Fixes a bug where VoiceOver would not work with 3rd party keyboards
- Improves stability and audio quality when using MFi Hearing Aids with iPhone 6 and 6 Plus
- Fixes an issue with VoiceOver where tone dialing would get stuck on tone until dialing another number
- Improves reliability when using handwriting, Bluetooth keyboards, and Braille displays with VoiceOver

Fixes an issue that was preventing the use of OS X Caching Server for iOS updates.

Reported iOS 8 Bugs and Their Fixes – iOS Tips and Tricks

Some of the Major iOS 8 Features Pushed to iOS 8.1 Release – Reasons Unknown