Apple has  told its developers that it will be raising the App Store prices in various countries soon. The plan is said to implement in the next few days. Apple's plan to increase prices in several countries is due to the fluctuating exchange rates, which might be affecting the company's profit. In total, there are seven countries whose App Store prices will increase in the coming days. So let's see which of the countries will experience increased in App Store prices.

App Store Prices To Hike Up In Seven Countries

As notified to the developers, Apple will probably implement the change in the next 72 hours. The impending changes will affect the following countries:

The details were discovered via the iTunes Connect notice. The Next Web were the first to notice the information. With the exception of Canada, most of the countries mentioned will only see a small bump in the price level. This is because the Canadian dollar is at its lowest of just 69 cents per US dollar. Henceforth, we will see a significant increase in App Store prices.

There will be no interruption in the subscription of New Zealand, Canada, Mexico and Singapore. However, soon after their existing subscriptions renew, users in these regions will receive a notifier email from Apple as to let them know about the impending changes in the App Store prices. Moreover, South Africa and Russia will need to resubscribe at the new price. Since Israel does not support auto-renewable IAPs, there will be no impact there. 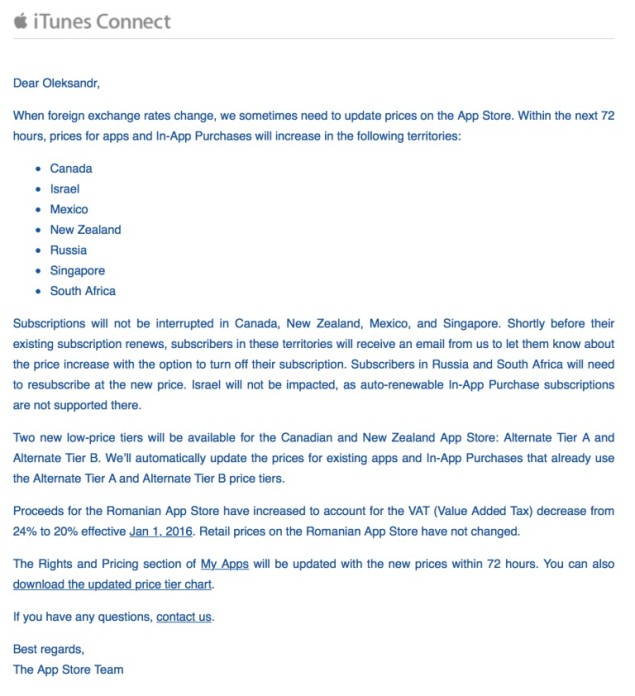 The change in price of App Store purchases was expected since the Cupertino based company adjusts its international prices to maximize profits. Whether it be apps, hardware or digital media, Apple adjusts the right balance between potential profits and discouraging shoppers. If anyone of you is interested in more details regarding the matter, you can review the Apple-documented outline prices for several regions.

Only users in the above mentioned countries will be affected by the App Store price adjustments. For the remaining regions, Apple is operating normally. The reviewed pricing will go live sometime in the next three days. This is it for now, folks. What are your thoughts on the App Store price changes? Do you think Apple will implement the same change in other regions as well? Share your thoughts on the matter in the comments.