Apple Pay has been gradually expanding to new countries over the years. Even though Apple's mobile payment service is widely accepted across various locations, the company does not seem to resist when it comes to its promotion. This week, the company is offering discounts of $5 on Fandango movie tickets when you make the purchase through the Fandango app or the Fandango.com website. There's more to it so be sure to check out the remaining details down below.

As we have mentioned earlier, Apple is offering an Apple Pay promotion this week which will give you a discount of $5 on the purchase of Fandango movie tickets. Do take note that the discounts will be available on the movie tickets through January 2 as per the email sent out to customers. In addition to this, you will have to make use of the promo code when making a purchase through Apple Pay.

Simply put the promo code "AppleCheer" at the checkout to get the $5 discount. In addition to this, Apple in its promotion is also highlighting apps that accept Apple Pay. These apps are promoted in the right slot as they can be used to plan New Year's party which includes Party City, Safeway, ULTA Beauty, McDonald's, TouchTunes, and Lyft. The overall attempt by the company is to promote Apple Py to its customers. 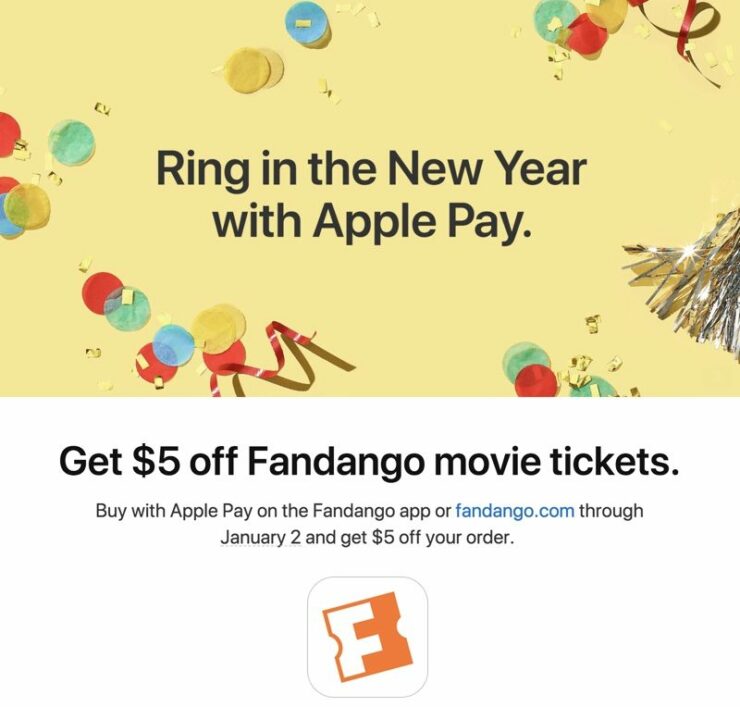 Apple's attempts to promote Apple Pay can be seen in the past couple of months as well as the company is also sending a couple of emails to its customers. The emails carry discounts and deals for customers as well as promotion for the Apple Pay mobile payment service. For instance, Apple in its November email offered a discount on the Postmates Unilimted subscription.

Apple Pay is the company's solution for a mobile payment service, The company has also added extensions to the feature as well. For instance, with the latest iOS 11 firmware update, Apple rolled out the Apple Pay Cash feature to its users. Apple Play Cash basically allows users to make peer to peer money transfer. The service is also available on the Apple Watch and provides convenience to users overall. There will be more to the story, so be sure to stay tuned in for more details on Apple Pay promotion.

This is it for now, folks. What are your thoughts on the $5 discount that Apple is offering on Fandango movie tickets? Share your views in the comments.