Like other OEMs, Apple refreshes its smartphones once a year but here’s the major difference; it still manages to take away the lion’s share of the industry profit. According to a new report, the company’s earning was more than that of its competitors’ combined in Q2 2018, and the technology giant was able to achieve this in a quarter where it does not end up selling as many iPhones are it normally does.

Apple Maintained a Commanding Lead Over Samsung, Which Managed Only 17 Percent of Global Smartphone Profits

Counterpoint Research has revealed that ‘lower than expected’ smartphone sales in the second quarter of the year were not enough to affect Apple’s profits. Apple held 62 percent of the combined smartphone profits, which is greater than the combined profits of Samsung (17 percent), Huawei (8 percent), OPPO (5 percent), Vivo (3 percent) and Xiaomi (3 percent). Apple has a clear lead over Samsung as its profits are 3.6 times higher than those of the Korean giant.

Samsung has been witnessing declining second-quarter profits since the last three years, and the low shipment volumes of its flagship Galaxy S9 series weren’t expected to turn around the situation this time. The 24 percent decline in the sales of Galaxy S8’s successor was met with a corresponding 21 percent decline in smartphone profits. 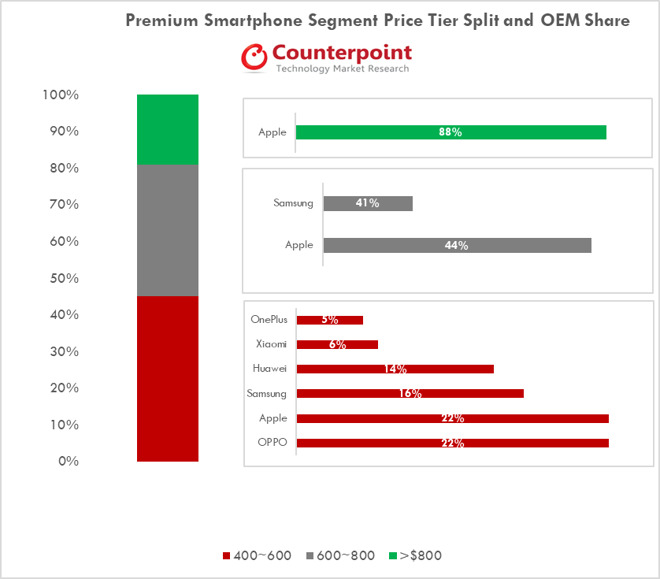 This was a terrific quarter for Chinese smartphone makers, with the companies generating a profit of $2 billion, which is a first for them. This profitability can be attributed to the higher production of high-end smartphones in the given period.

Other figures shared by Counterpoint Research explain the reason behind Apple’s profitability. The Cupertino giant accounted for 88 percent of the sales of the smartphones priced at $800 and above. With a 44 percent and 41 percent share of industry revenue respectively, Apple and Samsung dominated the $600-$800 price range.

OPPO and Apple both accounted for 22 percent of the revenue generated by the smartphones falling in the $400-$600 range, trailed by Samsung (16 percent), Huawei (14 percent), Xiaomi (6 percent) and OnePlus (5 percent).

Since profits in the smartphone industry are largely generated by premium models, it is not surprising to see that Apple is the king of the hill once more.