Apple and IBM have just announced a new partnership agreement. This announcement comes today and relates to the enterprise sector of the market. According to the announcement, the partnership is described as a "landmark partnership" aiming towards redefining the sector and " address key industry mobility challenges and spark true mobile-led business change." It seems like both the corporate giants have decided to complement each others' respective strengths and aim towards more successful market capitalization. In the partnership, Apple is to provide it's key strengths of iPhone and iPad design coupled with unique user experience. IBM, on the other hand will provide it's big data warehouses and experience in analytics. 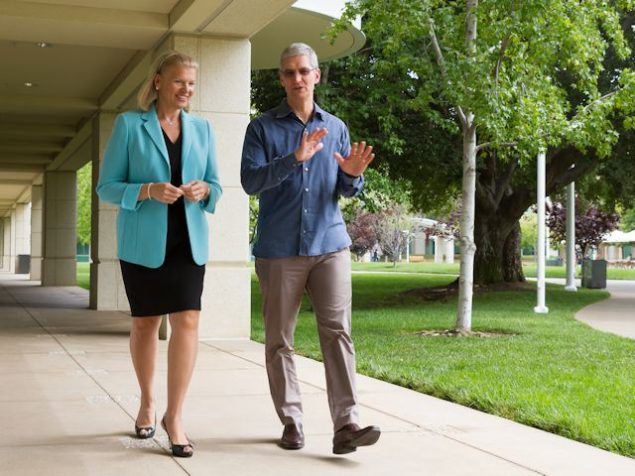 This comes from an interview given to Recode by Tim Cook and IBM CEO Ginni Rometty. In the interview, both described the union as being unique to the two companies. “If you were building a puzzle, they would fit nicely together with no overlap,” Cook said of the relationship. “We do not compete on anything. And when you do that you end up with something better than either of you could produce yourself.” Rometty said that the venture would enable the two corporate giants to solve many problems being faced by huge enterprises. “We will get to remake professions and unlock value that companies don’t yet have,” she said. “We’re addressing serious issues that before this had been inhibiting deployment of wireless in the enterprise.”

According to the agreement, Apple and IBM will have to develop more than 100 industry specific applications for Apple's iOS. These will include apps for banking, retail, healthcare, travel, security and data analysis. A new support package for enterprises will be added to the AppleCare. IBM however, will not become iOS exclusive, and will continue to support Google's Android and other systems. It will however begin to sell iPads and iPhone to it's corporate customers and will devote more than 100,000 strong workforce for it. In addition, enterprise applications developed for the iOS will run on IBM's cloud or private clouds that it has developed for it's clients.

Commenting on the partnership, Cook said "“We’re good at building a simple experience and in building devices. The kind of deep industry expertise you would need to really transform the enterprise isn’t in our DNA. But it is in IBM’s.” However, Apple's devices power the majority of corporate giants today in America. Mr. Cook himself is famous for reportedly saying that 98% of the fortune 500 are either testing or deploying Apple made devices. In fact, some customers on Apple's corporate list include names such as FedEx, American Airlines, NASA, General Electric and Barclays. The first of these applications are to be available starting next year.