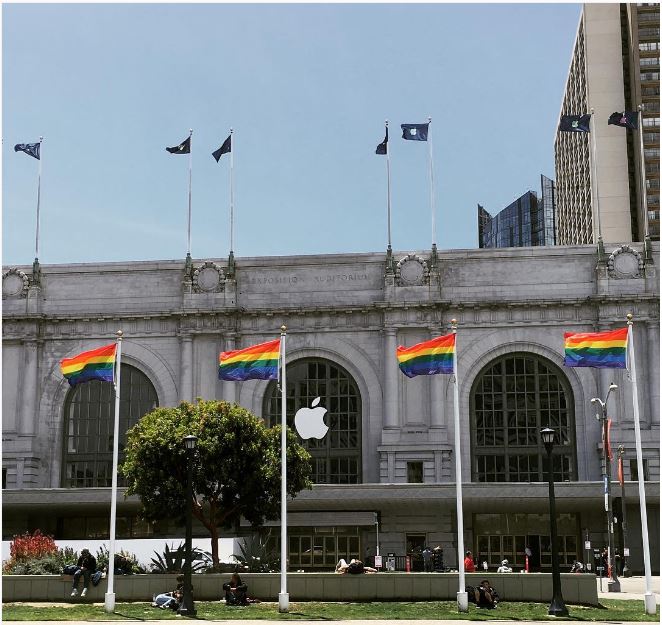 Apple's highly anticipated WWDC 2016 kicks off on Monday, June 13. Apple has started decorating Bill Graham Auditorium with massive banners ahead of the conference. The decorations are going strong and for the very first time, Apple has chosen the Bill Graham Civic Auditorium for its Keynote. Let's see what else is part of Apple's decoration for the event.

Apple's host convention center gets decorated every year with different sets of banners and logos that represents the company's matching event tagline. The preparations are well underway and the company will continue to decorate Moscone West for the next few days, probably showing logos for iOS 10 and OS X 10.12. Eventually, the venue will be ready at the time of the event.

There's a lot going on at the Bill Graham Auditorium as we speak. The company is putting window decorations, colored flags and logos all over the place. We highly expect that Apple will start putting banners based on this years WWDC promo material on the website as well as media invites, just the way it has been doing for a long time. Moscone West is also undergoing decoration as gigantic Apple logos are being applied on windows.

On WWDC 2016, Apple is expected to to introduce iOS 10, tvoS 2, watchOS 3 and the next version of OS X. Most probably, OS X will incarnate into something called macOS. This makes perfect sense as it will align itself with the names of other operating systems. While some rumors have hinted that Siri might be on its way to the Mac, a complete redesign of the company's music streaming service is also expected.

WWDC 2016 begins on Monday 10 AM, so do stay tuned for our ongoing coverage  of the event. This is it for now, folks. Are you exited for this year's World Wide Developer Conference? What surprises do you think Apple has in store for us. Share your thoughts with us in the comments.