Remember how we talked about Apple Maps and how much they sucked, not too long ago? You may also recall that we were hopeful for their evolution and betterment. Well dear iPhone user, sit back while we improve your experience with some good news by sharing something new related to Apple Maps.

For those of you who are still clueless what we're on about, Apple recently launched their own version of Maps, thereby ridding themselves from the dependency on Google Maps. While there's a widespread agreement on Apple's failure by taking this move, we all were secretly hopeful of its evolution. And it all begins from this. 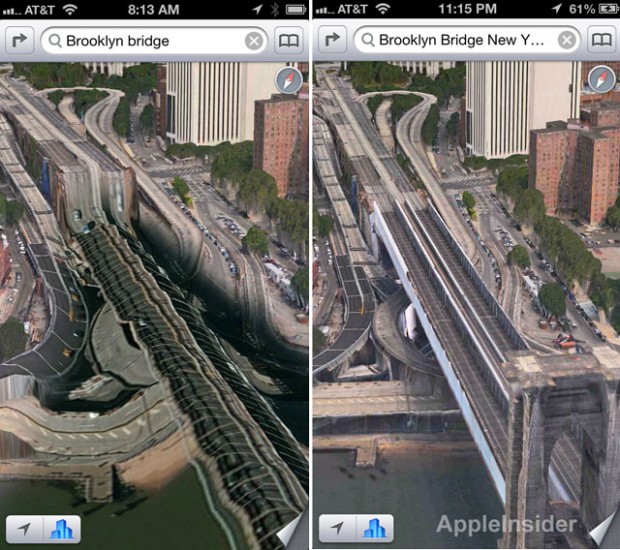 We'll bring you up to speed by telling you about Flyover first. Flyover is basically Apple's way of giving you a bird's eye view of our tiny world. It lets you observe things from a skyward view.  Just this week Apple began enhancing the 3D view feature of Flyover. Previously the 3D view gave you a distorted, jagged view of the bridges, buildings etc. Now Apple has refined them to make them look almost real and believable.

CAUTION:  The updated changes are not available for everyone and some devices are still showing the old data. The variation lies across devices. For example, you might see the updated Flyover on your iPhone but not on your iPad.

The critical impact on Apple Maps has been overwhelming because Apple Maps are much inferior to its Google Maps counterpart. While the company's new CEO, Tim Cook publicly apologized to the public for the quality of iOS 6 Maps, he assured us that they're doing everything they can to make the new Maps better and on-par with market competitors.

3D flyovers are one of the key features in Apple's new maps. It combines overhead images with 3D geometry to view major cities in unconventional ways and discover information not possible previously. However the distortion in 3D view was illegible which led to a lot of criticism. Google has also introduced new satellite imagery that takes images at a 45-degree angle in order to compete with Flyover. They've also introduced "Street View" in Safari on iPhone and iPad. Sly move, we must say.

Google has announced production on Google Maps which would be available for download on the App Store. That would not only allow them to get back into the competition but also increase their profits manifold. The exact release date for the standalone app is not yet known but we're expecting its availability at the end of the year, at the earliest.