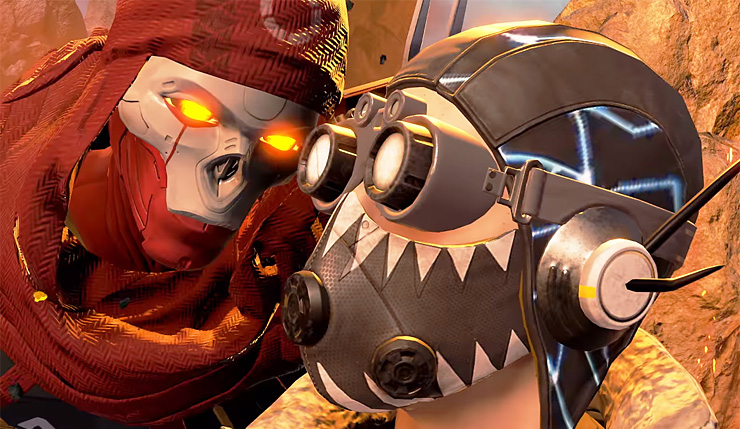 Apex Legends Season 4, entitled “Assimilation,” kicks off today, and Respawn has released a ton of new trailers and info to get you hyped. First up, here’s a look at the season’s new Legend who killed the guy we previously thought would be the new Legend -- the robotic hitman, Revenant.

A human hitman turned into a nightmare simulacrum, Revenant has been dealing death for centuries. The return of Hammond Robotics to the Outlands has given him a new target. Now his synthetics sights are set on the company that created him and any Legends who cross his path.

Revenant throws out Silence devices to disable other Legends’ abilities and make them easy prey. And with his ability to scale obstacles and crouch-walk with unnatural speed, nowhere is safe. Revenant can even rescue his squadmates from death itself -- as long they’re useful to him. Become a killing machine and teach your foes the meaning of fear.

Here’s a rundown of what will be included in the new Season 4 Battle Pass.

Hmmm, wait, that’s not what I remember the map looking like! Yes, Season 4 introduces some major changes for World’s End, as the map has been cracked open by Hammond Robotics’ giant Planet Harvester. Areas that used to be covered in ice and snow have received a fiery makeover. Here’s a more detailed rundown of the changes:

As you drop into World's Edge, you'll immediately see the Planet Harvester, which Hammond Robotics are using to gather precious metals from the core of the planet. The red beam can be seen from the entire island, giving players a better sense of directionality and understanding of the center of the map.

With its large, multi-level design the Planet Harvester is unlike anything else on World's Edge and brings exciting new gameplay options to the game. Fights are largely self-contained as squads will tend to enter the fight through the long hallways that lead to the center of the structure. This should make 3rd parties a little more predictable and hopefully easier to defend against.

Capitol City was the biggest POI in Season 3, getting the most action right out of the ship. By sending the fissure straight through Capitol City and creating some dead space in between (swallowing up one of the construction buildings as well), we essentially split this area into two separate zones for players to land in and loot: Fragment East and Fragment West.

The large fissure can only be crossed in two locations (a zipline, or a fallen skyscraper bridge). This allows teams some breathing room to control one side after the drop, reducing the risk of running into 3rd parties from the other side of the city. Is the construction site too hot for you? Land in Fragment East and use a Wattson or a Caustic to control the choke points for extra security. Of course, Pathfinder and Octane can both use their ultimates to get their teams across at any location.

If you jump into the fissure that cuts through Capitol City you’ll slowly be carried back up from the heated, pressurized air, and allowed to coast across and land on the other side. This is balanced by two things. First, you take 25 damage from the intense heat and embers floating inside. This is a consistent amount of damage every time you drop back down. Second, you travel very slowly, in third person, while moving in the updraft. You are essentially a flying loot piñata for any nearby enemy players.

This is a new, small POI in the snowy fields between the Epicenter and Skyhook. This is another camp created to relieve the pressure of locations like Capitol City, Refinery and Epicenter. It also creates some potentially new rotations, like moving through the train tunnel to get to Skyhook. Because this is a small POI, we wanted to give it a little more of a draw. For this reason, we created Weapon Racks.

These are guaranteed weapons placed on racks in the small buildings of Survey Camp. You’ll recognize them from Training or the Firing Range. his should give players who prioritize a good weapon over a premier drop location a new decision to make. We’re always excited to try flipping Battle Royale rules on their heads, and we look forward to seeing how this feature influences where players drop.

Apex Legends is available now on PC, Xbox One, and PS4. Season 4 kicks off today (February 4).