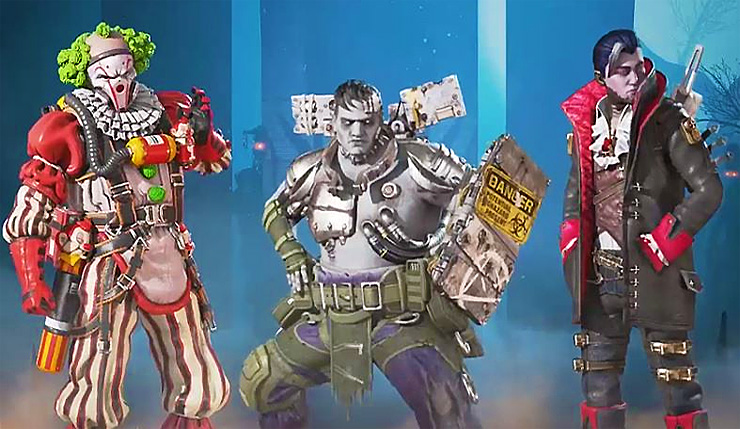 Halloween is fast approaching, and, unsurprisingly, Apex Legends is getting in on the spooky fun with their “Fight or Fright” event. The thing players will likely be most excited about is the new Shadowfall limited-time mode, which casts the Kings Canyon map into darkness, and lets players come back as zombies after being killed. Of course, Fight or Fright will also come with a variety of new cosmetics, which can be purchased directly with real money, found in Apex Packs, or created with Crafting Metals earned in game. You can check out the full rundown of everything included in the Fight or Fright event, below.

TL;DR - What’s in the Event

Darkness descends on Kings Canyon in Shadowfall, a warped version of the Apex games hosted by a mysterious figure. At the start of a match, you and 34 other solo players will drop into an eerily-lit Kings Canyon and fight to the death…with a dark twist. Once you die you will respawn as an undead version of your Legend and join the powerful “Shadow Squad”.

As part of the Shadow Squad, you will lose your ability to use weapons and your legend abilities will be stripped, but in return, you will be given increased movement and jump speed, along with a brutal melee attack. You’ll also have the ability to scale walls and be given unlimited respawns via skydive. The battle rages until there are only ten living Legends left, who must then join forces and make it to an evac ship while the Shadow Squad attempts to stop them at all costs.

The Fight or Fright Collection Event brings another set of 24 themed, limited-time cosmetics to Apex.

Starting with the Fight or Fright event, there will be three ways to earn cosmetics – buy them outright with the Apex Coins premium currency, get them in Apex Packs (loot boxes) bought with Apex Coins, or create them with Crafting Metal earned in game. Here are the costs for everything and Apex Pack probabilities…

Apex Legends is available on PC, Xbox One, and PS4. The Fight or Fright event begins on October 15 and runs until November 5. Apex Legends recently kicked off Season 3, which includes a new Legend and fire-and-ice-themed map – get all the details here.