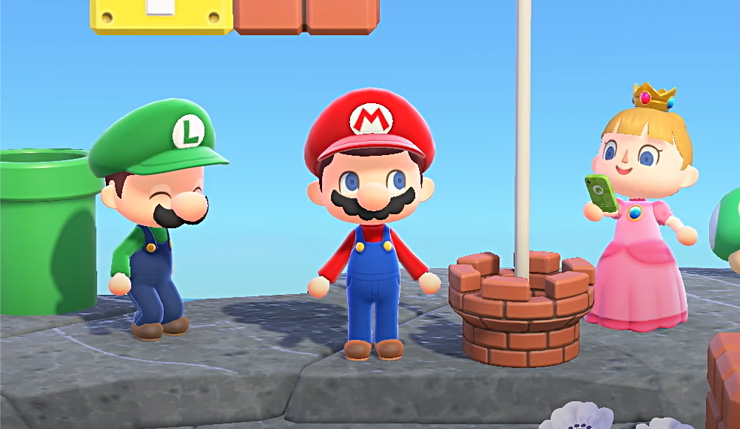 Nintendo’s several months long celebration of the 35th anniversary of Super Mario Bros. comes to a close soon, but before it does, Animal Crossing: New Horizons is getting in on the fun. Starting next month players will be able to acquire Mario and Luigi outfits, Super Mushrooms, Question-Mark Blocks, and more. Perhaps the most interesting, and useful, will be the new Warp Pipe item, which will essentially allow you to set up fast travel points around your island. You can check out a quick trailer for the Animal Crossing Super Mario goodies, below.

Looks like a fun collection of stuff, even if the Animal Crossing villagers look a little…odd…in their Mario duds. I like that you’re basically able to create your own little Mario levels with the new stuff. Here’s a bit more detail about the Super Mario update, courtesy of Nintendo…

Items inspired by the 35th anniversary of the Super Mario Bros. game are coming to Animal Crossing: New Horizons. Familiar items like the Super Mushroom and the “?” Block can be ordered in the game as furniture items, so you can place them wherever you want. You can even place multiple Warp Pipes on your island and easily travel between them. The new Super Mario Bros. themed items will be available starting on following the free update to the Animal Crossing: New Horizons game on February 25.

The most recent Animal Crossing: New Horizons update added a Carnival-inspired event (or “Festivale” in AC world) and an array of Valentines-Day-related seasonal items. Nintendo has also released a variety of Hello-Kitty-themed amiibo cards that add new exclusive animal villagers to your island.