ASUS was slow at rolling out major software upgrades to their devices in the past. However, the company switched things around and is now doing a decent job of keeping all of their devices updated with software updates. Along with flagships such as the Zenfone 5z, other mid-range devices such as the ZenFone Max Pro M1, Max M2, and Max Pro M2 have received the update as well. Today, the company has begun the Android Pie rollout the ASUS ZenFone 5 Lite. The device is known as the ZenFone 5 Selfie Pro in parts of Europe, and as ZenFone 5Q in the U.S.

The update bears build number version WW-16.0610.1905.79 and weigh at ~2GB. The changelog isn't particularly descriptive and only says "update to Android Pie".  The update is expected to arrive on all devices worldwide in the coming weeks. You can also sideload the update using this link and follow this guide. One major change we can expect in the update is the shift from ZenUI to a cleaner, customisation-free version of the OS.

HTC's smartphone arm isn't doing particularly well as demonstrated by low sales and sub-par devices that cannot compete against other equally-priced flagships. A few months ago, HTC had announced its plans to deliver the Android Pie update to a few devices. The company has delivered on its promise and pushed updates to some of the newer devices such as the U12+. Today, the HTC U11+ is receiving the update, according to a Twitter user. 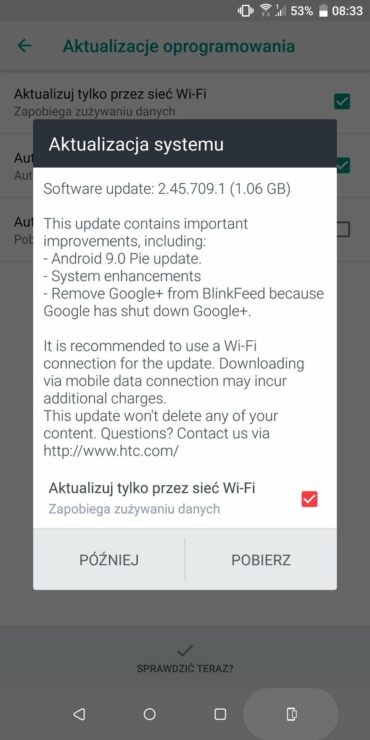 The update has build number 2.45.709.1 and is 1GB in size. It isn't clear if the update is fully rolling out in Taiwan, or if it's being tested first on a limited number of devices. It will very likely roll out in Taiwan and then eventually on devices across the globe. It will likely vary according to factors such as region, carriers etc.