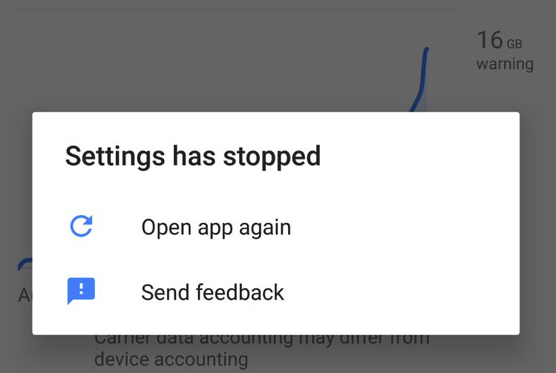 Android 8.0 Oreo has been running into a lot of troubles lately. The latest issue to pop up on the version is the crash of Settings app whenever users try to check mobile data or WiFi usage. The issue has already started annoying users who keep a tab on their data usage. Apparently, Settings app gives up as soon as data usage option is tapped.

A user named Artem took to Twitter to share the issue he has been experiencing on his Pixel XL phone. Several other users also replied to his tweet claiming that they are experiencing the same problem, too. Another tweet by Eddie Ringle states that the fix for this issue was submitted to the main branch of AOSP, but it didn't get included in the Pixel XL's Oreo release branch.

For now, the issue seems to be affecting Oreo devices with too many internet-connected apps running simultaneously. If you are on Oreo and experiencing the same issue then maybe you can try to reduce your apps to check data stats. Oreo running devices other than the Pixel XL may also be affected by the same issue, but users who don't check data or WiFi stats may never get to know about it.

If you are one of those who don't keep a check on their data or WiFi usage then you won't be affected by this issue. But if you're among those who like to track their usage cycle, then you will have to wait until Google comes up with a fix for it. This bug is not new though, if you check this Issue Tracker entry then you will find someone reporting the same issue at Xiaomi in March 2017.

Are you also facing the same issue on your Oreo running device? If yes, then do let us know in the comments section below. We will be updating this article as soon as Google addresses the issue and starts rolling a fix for it.