Looks like the day is finally here for Sony Xperia users, as the carrier has started to (finally) started to roll out Android Lollipop for Xperia Z3 and Z3 compact in select regions. Sony has started to roll out the update in Nordic and Baltic regions, with the software firmware being build 23.1.A.0.690. The Lollipop update for you Xperia Z3 will depend on your location and carrier, so looks like we're going to have to wait a little longer to be able to enjoy Lollipop goodness on our Sony flagship. Nevertheless, the update brings with it screenshots and we've collected and analyzed them for you. So take a look below. 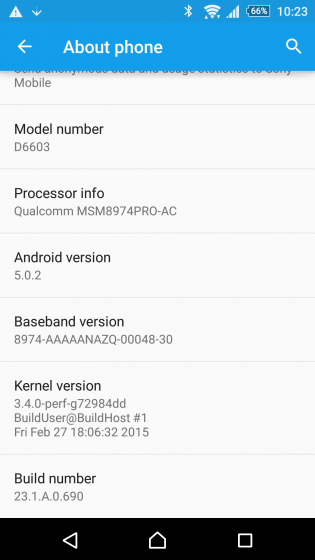 With Android Lollipop, you can now (finally. .) enjoy all of Google's Material Design interface and other upgrades on your Sony device. Like us, if you're waiting for Lollipop on your device then you should be able to pass your time by looking at today's screenshots. But before we get to them, lets first take a look at what updates Android Lollipop brings to the Xperia Z3 and Z3 Compact. According to a post on the manufacturer's official blog, Android Lollipop brings an entirely new look to the devices and ends up retaining Sony's “minimalistic” approach towards software as well. Sony also plans to start Lollipop rollout for Xperia Z3 for other markets in two weeks time, so there's a little bit of more waiting to be done.

Lollipop's card based notifications style and an updated lockscreen have also made it on board the Xperia Z3. The Settings menu also receives an upgrade with an improved look and Lollipop's updated multi user interface coupled with a guest mode will also be finally available for Sony's Xperia Z flagship smartphones. Android Lollipop seems to be limited to the Xperia Z lineup however, so if you're a non-Z user, there aren't any plans yet from the manufacturer about your devices. With Android Lollipop you'll also be able to move apps to and fro from your SD card as well and will be use your Xperia Z devices better at work, with Android for Work. So take a look at all the screenshots from Android Lollipop on the Xperia Z3 (. . finally) courtesy of folks over at XDA and let us now what you think in the comments section.