In a discussion related to technology and market trends for the data center, Liviu Valsan (computing engineer at CERN) showcased slides which detailed AMD's upcoming Opteron processors that feature their x86 Zen core architecture. The session not only provided details on AMD's next generation processors but also mentioned Intel's Broadwell-EP chips along with enterprise aimed storage and memory solutions.

AMD's Opteron lineup hasn't seen any significant update since 2011. The Opteron 6000 series processors that are available today are based on the older Piledriver architecture which was introduced back in 2012. The x86 Piledriver core delivers a modest update over the Bulldozer architecture hence the Opteron processors really couldn't stand out against the Intel's server offerings which picked up the pace since Sandy Bridge. However, AMD expects to change the scenario with Zen and come back in the data center market with faster next-gen Opteron processors which will deliver high core count, faster performance and improved efficiency on a 14nm process node.

The AMD Opteron processors should not be mistaken with the Exascale processor which is doing the rounds in the rumor mill. The Exascale processor is part of the HPC APU product stack which is a multi-chip package that comprises of several dies that incorporate Zen cores, GCN cores and DRAM stacks (HBM), interconnected via a faster coherent fabric that AMD has planned for their next generation exascale solutions and rumored to have interconnect speeds up to 100 GB/s. The AMD Opteron processors will solely comprise of a single or several CPU dies which will be interconnected to deliver high core count, disruptive memory bandwidth through using a combination DDR4 and HBM DRAMs and high native I/O capacity.

During the talks, the CERN official stated that AMD will be building their next generation Opteron processors with their Zen core architecture. The new Zen core is based on the 14nm FinFET technology that is being built developed by Global Foundries and is expected to deliver up to 40% IPC (Instructions per clock) improvement. The other key point mentioned is that the Opteron processors will feature up to 32 physical cores. All 32 cores are based on the Zen architecture and will feature SMT (Symmetrical Multi-Threading) which brings the AMD design closer to Intel's design as they have been using Hyper threading for quite some time. The technology works is a similar way, albeit with some AMD added enhancements/tweaks.

One key point explained by Liviu is that AMD might go with the MCM design as they currently do with their Opteron 6300 series processors. The Opteron 6380 packs two 8 core "Piledriver" CPUs on a single die that functions as a single processor. The Zen based Opteron will pack 32 cores in several stacks to form a package which will function as a single 32 core Opteron chip. The CPUs would then be interconnected through a next generation fabric to eliminate data transfer and communication bottlenecks between the two chips. This information also gives us a slight bit hint at AMD's design strategy. With Piledriver, AMD used two 8 core modules on their Opteron while 8 core was set as the highest count on consumer processors. 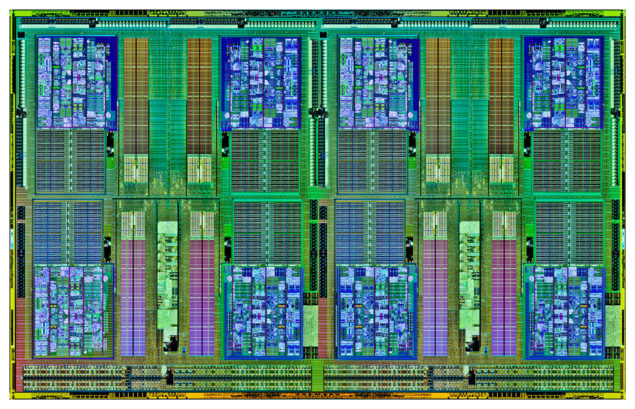 The 32 core count count mean that the consumer and server offerings with single chip packages can pack up to 8 cores. The stacking would allow AMD to push several SKUs ranging from 8, 16, 24 and up to 32 core models. Although it would be AMD's decision entirely to offer such SKUs in the market but having that many cores on enterprise platforms will be interesting. On desktop consumer platforms, AMD will have up to 8 core FX series processors serving the enthusiast space. Intel themselves have upped the core count to 10 with the upcoming Broadwell-E HEDT and 22 on the Broadwell-EP generation of processors. All Intel chips utilize a single CPU design unlike AMD's multi-chip design.

Lastly, support for 8 channel DDR4 memory and PCI-e Gen 3.0 was mentioned. Eight channel sounds like a step up for AMD. AMD's Opteron platform is expected to hit shelves later in 2017 while Intel has their Broadwell-EP platform launching in Q1 2016. AMD's platform will be competing by then with Intel's Purley platform that has Skylake-EP stacked up against it. While AMD's Opteron platform looks decent enough against Broadwell-EP as it has 32 cores versus 22 on Intel, support for 8 channel DDR4 versus 4 channel DDR4 on Intel and a fast inter connect fabric, things might shape up more interesting with 2017's Purley which brings Intel's latest micro-arch codenamed Skylake to the enterprise market. Nevertheless, AMD believes that they can address 80% of the server market with their Zen powered Opteron processors.

Okay and then as a follow up, what kind of performance point should we look at your initial Zen in the server space, is it Xeon E3 class type products or E5s or maybe you can help with some granularity there if you can?

Yes, we believe that we’ll be able to address let’s call it you know 80% of the server CPU market with our Zen class of products. So that’s a very high end but you know really the meat of the market. AMD via SeekingAlpha