AMD is expanding its product offerings in a very imaginative way, something that is a very healthy habit for companies to adopt. It has just recently unveiled its Solid State Drive (SSD) lineup labelled Radeon SSDs. The lineup revealed so far consists of 3 SSDs of the Radeon R7 SSD Family and consists of 120 GB, 240GB and 480GB respectively. As usual our Chinese friends over at EXPReview.com came through with details about the lineup. 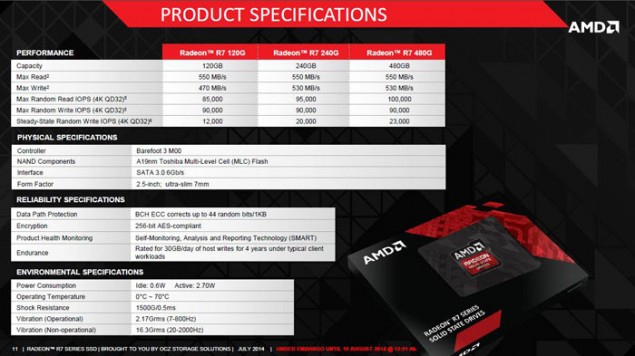 It would appear that AMD has plans to become an all-in-one company for the needs of PC Gamers. They are already supplying CPUs, GPUs, APUs, RAM and now they will be churning out SSDs too.  I have a feeling that in a few years we are going to be looking at PC builds consisting entirely of AMD parts. Now as you may have noticed, these SSDs are coming in three variants. The maximum capacity of these SSDs is almost half a Terabyte while the minimum is 120 GB. Which makes sense, because anything less than 120GB is really not feasible for installing an operating system on. Less than 120 GB SSDs can be used as scratch disks for professional programs but that isn't really AMD's target audience. Anyways, without further ado, the specs of the lineup:

Now the Radeon Solid State Drive lineup is built on Toshiba's 19nm node, A19nm Toshiba Multi Level Cell (MLC) Flash design to be specific. The interface is ofcourse SATA III 6GB/s and the form factor is 2.5 Inches with an ultra slim 7mm width. The disk is 256 Bit AES path compliant and contains the usual features such as SMART and has an expected life span of 4 Years (30GB per day) or 42.7 Terabytes of write. It consumes a marginal 2.7W of power and can operate from 0c to 70c. The Radeon R7 SSDs can withstand shocks of upto 1500Gs and an operational vibration of 7-800Hz. Though I do not know the exact pricing at this point, you can be rest assured that the prices will be very wallet-friendly since AMD's complimentary products usual are. AMD has also provided a comparison graph that shows just how well AMD's Lineups of R7 SSDs fares against competitors such as OCZ Vertex, Samsung 840 EVO, Crucial M500, Sandisk Extreme Pro and Kingston HyperX. I have always thought SSDs a luxury that one can go without, but if red plays its card's right, I might have to reconsider my opinion. 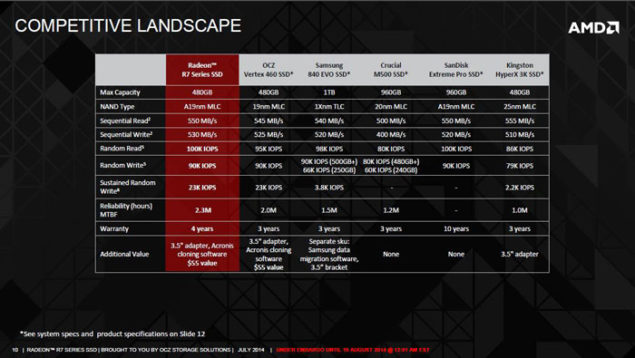 #AMD has just unveiled its SSD lineup. Cant wait to see the pricing on this 😀 http://t.co/PP0g0ZlY81