A specification chart has been leaked which details six new upcoming APU's (Accelerated Processing Units) based on the Trinity Architecture from AMD. A roadmap was also spotted a few days ago which revealed the release dates of the FX-Vishera, Trinity and Brazos processors. The Trinity A10/A8 Quad Core Series would launch in Q2 2012 while the Dual Core A6/A4 would follow up in Q3 2012.

All of the new Trinity APU's pack GCN Core based DX11 Graphics processing Units, The HD 7660D has 384 Graphics CoreNext stream processors, HD 7560D has 256 of these, the HD 7540D has 192, and the HD 7480D has 128. The HD7840D doesn't allow for dual-graphics support which lets you pair a discrete graphics solution with the embedded chip. 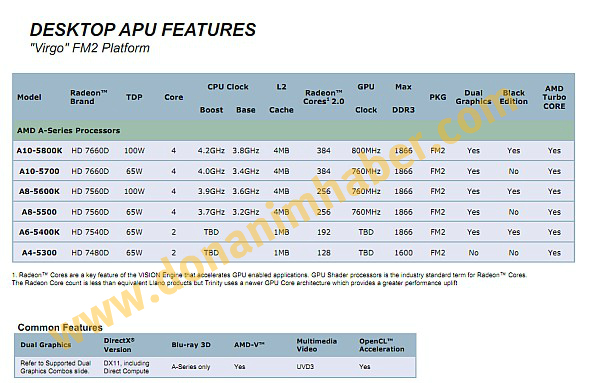 The Performance of the new embedded chip would 50% better than previous generation Llano Fusion and 103% better than Sandy Bridge based ultra low voltage processors. Performance details can be found here.

The APU's are listed below:

All APU's come with DX11 support, 3D-Blu Ray, UVD3 Multimedia functionality and OpenCL Acceleration. Prices are not announced yet.