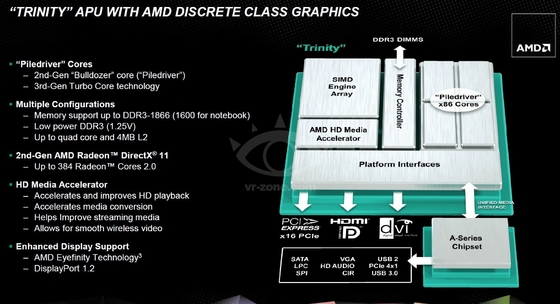 AMD fans worldwide would be aware of what’s taking place on 15th of May this year. That’s right; the red team is gearing up to launch a new line of A series processors that will succeed the line of Llano processors codenamed Trinity. And soon enough, early presentation slides got leaked courtesy of VR-Zone that details of the improvements over the previous generation.

These Trinity APU processors from AMD hold immense value as Intel has managed to come up with an integrated graphics processor (or iGPU for short) that can compete against AMD. Initially, the changes include lower TDPs with improved performance as the notebook processors are rated at a mere 17W, 25W and 35W TDP respectively. Desktop wise, it still maintains the 65W and 100W mark. The next generation of APUs come with two Piledriver modules built on top the Bulldozer architecture. 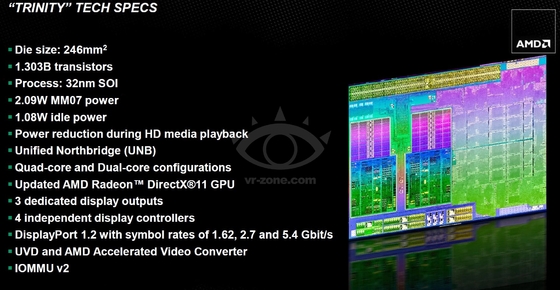 Besides adding new instructions, AMD like Intel have refined their overall architecture whereas units that perform integers as well as floating point calculations have been left as it is. Besides that, the scheduler, dividers and cache have been heavily optimized that would result in better performance at the same clocks as there are in the current FX series.

While in comparison between Llano and the A series, AMD estimated an increase of 26 percent and 29 percent of performance improvements in both desktops and notebooks respectively. Clock speeds will be between 2 to 2.8 GHz that varies on models and their market availability. That does sound interesting as they would have their 17W variants put up against Intel’s ultrabook concepts that are clocked at a minimum of 2 GHz. 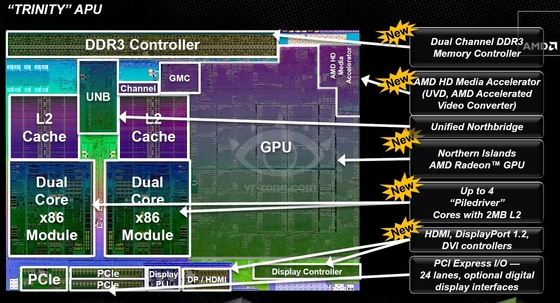 The new iGPUs are also built on the same architecture used for the HD 6900 series GPUs. They in total consist of six VLIW4 clusters that totals to 384 Radeon cores. Tessellation alongwith their UVD engine has improved video playback with even lesser power consumption. The biggest factor in terms of display is that it comes with EyeFinity support for up to 3 monitors. You won’t be able to game on all three screens although it will help you increase your productivity.

The graphics core is clocked between 424 to 800 MHz that varies from model to model.

The top model for notebooks namely A10-4600M will get a graphics core clocked at 496 MHz with a turbo of 685 MHz along with 384 Radeon cores. You can check out more details here.