AMD has announced that it will be transitioning all of its 20nm chip designs to FinFET in its updated financial guidance statement published yesterday. AMD had previously stated that it will be launching 20nm products this year. This included AMD's Sky Bridge platform APUs which promised to feature both x86 and ARM variants that were not only socket compatible but pin-to-pin compatible as well.

There were also rumors last year that AMD would be shrinking the console chips to from 28nm to the 20nm process this year. However AMD's statement yesterday confirms that the company will be migrating 20nm products to a leading edge FinFET node.

AMD has yet to specify which FinFET process it's talking about. Whether it's referring to the common 14nm process node of the Globalfoundries Samsung partnership i.e. 14nm FinFET ( 14LPE and 14LPP ) or TSMC's 16nm FinFET ( 16FF and 16FF+ ) is yet to be confirmed.

The company started several product designs in 20nm that will instead transition to the leading-edge FinFET node.

AMD has several FinFET based products planned for release in 2016. Including an updated enthusiast line of FX CPUs based on the all new high performance x86 core code named "Zen" . Which is estimated to deliver a 40% improvement in IPC over its predecessor, Excavator as well as introduce simultaneous multi-threading technology for the first time in an AMD x86 CPU core. In addition to Zen, AMD has announced a new graphics architecture that will debut next year on FinFET as well. With up to twice the power efficiency of AMD's current 1.2 iteration of the GCN graphics architecture found in AMD's latest Fiji GPU powering the R9 Fury line of enthusiast graphics cards and the Tonga GPU powering AMD's R9 380 graphics card. 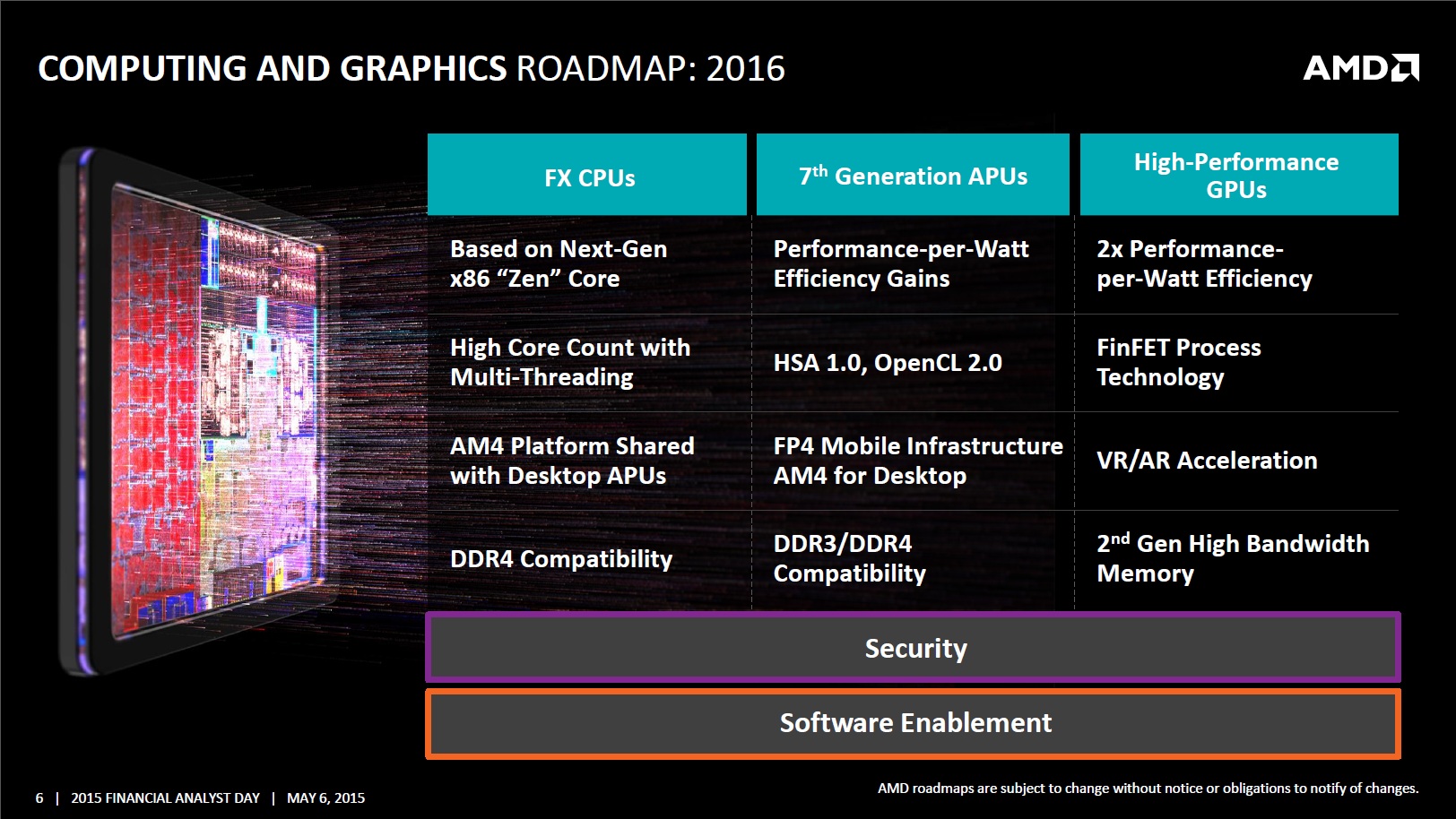 The company did not name its upcoming FinFET based graphics architecture, but numerous leaks suggest that it's code named "Arctic Islands" and "Greenland" will be its flagship. These GPUs will feature second generation stacked High Bandwidth memory and the code name was apparently chosen to reflect the significant power efficiency gains that the company is anticipating from these new chips.

The confirmation of moving the company's existing in-house 20nm chip design plans to 16nm came with a $33 million charge reflected in the company's revised 2015 Q2 earnings guidance published yesterday. AMD's revised forecast guides revenue down from the previous 3% plus or minus 3% to a fixed 8% figure. Interestingly the decline according to the company was not due to the channel, which it states is returning to a more healthy state of being. The sharp decline is blamed on largely soft OEM APU sales that missed previous estimates.

SUNNYVALE, CA -- (Marketwired) -- 07/06/15 -- AMD (NASDAQ:AMD) today announced that revenue for the second quarter ended June 27, 2015 is expected to be lower than previously guided. The company now expects second quarter revenue to decrease approximately 8 percent sequentially, compared to the previous guidance of down 3 percent, plus or minus 3 percent. The sequential decrease is primarily due to weaker than expected consumer PC demand impacting the company's Original Equipment Manufacturer (OEM) APU sales. The company expects second quarter channel sales and channel inventory reduction efforts to be in-line with the company's plans.

The company anticipates non-GAAP gross margin to be approximately 28 percent, compared to the previous non-GAAP guidance of approximately 32 percent primarily due to a higher mix of Enterprise, Embedded and Semi-Custom segment sales and lower than anticipated Computing and Graphics segment APU unit volumes due to weaker than expected OEM PC product demand. Additionally the company anticipates GAAP gross margin to be further impacted by a one-time charge of approximately $33 million associated with a technology node transition from 20 nanometer (nm) to FinFET. The company started several product designs in 20nm that will instead transition to the leading-edge FinFET node.

Cash and cash equivalents at the end of the second quarter are expected to be approximately $830 million, in line with expectations.

AMD will report second quarter 2015 results after market close on Thursday, July 16, 2015. AMD will hold a conference call for the financial community at 2:30 p.m. PT (5:30 p.m. ET) that day to discuss second quarter financial results and to provide information regarding expected third quarter results. AMD will provide a real-time audio broadcast of the teleconference on the Investor Relations page at http://www.amd.com. The webcast will be available for 10 days after the conference call.