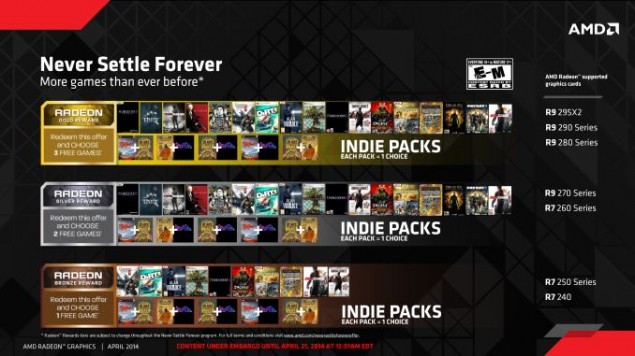 Almost all of the Radeon 200 Series covered by the refresh. Cards still separated into three tiers -Gold, Silver and Bronze.

The Gold Reward Tier of the bundle is reserved for the high-end products/cards. This includes all the Hawaii and Tahiti GPUs namely the R9 295X2, R9 290X, R9 290 and R9 280. The Silver Tier includes the R9 270 and R7 260 while the Bronze category covers the R7 250 and R7 240 cards. On the games front, AMD has added several new titles this year. In addition to this, the company has also decided to promote indie titles this year, with a slight change in the reward system. As expected, the games are bundled in a 2 for 1 offer, with 2 Indies being offered for one standard game. The Gold and Silver tiers offer a selection of 17 titles, while the Bronze tier offers 10 titles.

Coming towards the full budget games, the only 2014 games to be featured in the bundle are Thief and Murdered: Soul Suspect. They are available only in the Gold and Silver tiers. Other titles include releases primarily from Square Enix and Sega, featuring items such as Payday 2. This greater emphasis on classics and older titles is, according to AMD, a response to customer demands. This leaves this year's bundle comparatively weaker as compared to last year's. Some titles that we previously informed you about:

Moving towards voucher redemption, AMD is offering vouchers from this wave of the bundle to be kept up to 31st August 2014. It should however be kept in mind that game availability depends on the number of keys AMD has and the conditions set by it's developer. Distribution of vouchers is taking place at retailer level and coupons have become available as of the 21st this month. Additionally, AMD has also pointed out that consumers need to make sure their retailer is participating in the promotions. For further details, you can head over to the official page.