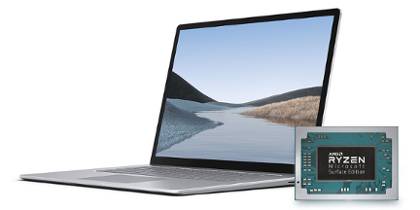 The latest design win for AMD (NASDAQ:AMD) from Microsoft (NASDAQ:MSFT) is a big deal, not just for the technology that is going into the Microsoft Surface platform, but also for the financial benefits this win will bring to the company. Intel (NASDAQ:INTC) has long been a dominant player in the OEM space and especially in the ultra-thin market and with this product announcement the first real cracks are starting to show for the chip goliath.  AMD, it should come as no surprise to our readers, has grown considerably in the DIY marketplace with reports showing the company outselling Intel by a large margin at certain retailers. The areas in which it is was much slower to pick up steam was in the OEM and Datacenter. That is now starting to change with the well-positioned and powerful new products AMD is releasing.

Lynx Equity Strategies analysts are looking at the competition between AMD and Intel as a “zero-sum game” and this round goes to AMD.  They still are expecting revenue and earnings from AMD to come in line with current estimates but feel this is a multi-year story where the company has focused clearly on the competition and made large gains over the recent years.  They are quoted as saying, “The architectural advantages AMD designs in servers and PCs is magnified by the manufacturing muscle TSM brings to the table. TSM’s recent increase in 7nm capex is a clear positive for AMD, even as INTC’s production ramp of 10nm server CPU is at least a year away. We see AMD headed up for the $40 level by year-end and INTC headed down for the $45 level."  Unfortunately for AMD, they did not see much in the way of gains in today’s market with the response best labeled as tepid.

Wells Fargo (NYSE:WFC) states the "announcement reflects another validation of AMD’s latest CPUs and competitive positioning against Intel."  They further state that "investors could initially consider this representing as much as ~$5-15M of quarterly AMD revenue from this design win." This would equate to a range of $20-60 million additional annual revenue which does not look like much compared to the 2018 annual revenue of $6.48 billion, but it does signify that AMD is competitive with its rival in the more premium end of the market.  This is a good shift for AMD which until now in the laptop OEM market was still relegated to lower to middle range products and slim offerings in comparison to its competitor and should help the company to increase margins and ASPs. This is clearly the case, considering this win was using the previous Zen+ architecture and not the latest Zen 2 and 7nm node process technology.

Additionally, the Lynx analysts have picked up on dissatisfaction with Intel’s server platform at Google (NASDAQ:GOOGL) with the analysts stating, "Except for the well-advertised Stadia gaming platform at Google based on AMD’s 7nm GPU, Google so far has not been a big supporter of AMD at its mainstream servers. However, that may be about to change. We are picking up rumblings of dissatisfaction at GOOG with INTC’s server platform. While the issues of Meltdown and Spectre, first discovered by Google researchers, have been addressed by INTC in terms of bug-fix, we think there is a new issue that is causing concern. Furthermore, our field research into the hardware supply-chain shows that Google-specific server boards are being built with AMD’s Epyc server CPU, a first. A design win at Google data center could be a key winner for AMD and a substantial loss at INTC."