The folks over at Videocardz.com have spotted the listing of the Radeon R9 300 series lineup courtesy of the Sapphire add in board partner of AMD. All the cards in the R9 300 series have been listed, since Fury does not constitute part of the R9 300 series (far as we know) it hasn't been listed here. However, the prices currently being shown on the e-tailers are place holders. 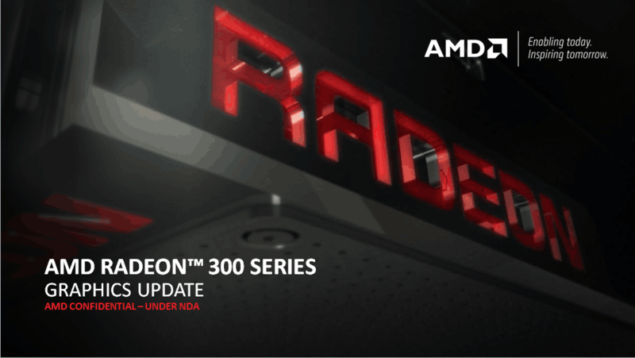 The lineup is exactly as expected and consists mostly of rebrands. The Hawaii chip can be spotted in the Radeon R9 390 and R9 390X. The particular variant is believed to be an enhanced Hawaii with better binning and efficiency and is listed at 1050 Mhz core clock. The vRAM however has been upgraded to 8GB of GDDR5 (which combined with the 512 bit bus should make for a pretty interesting combination).

The Tonga GPU makes its appearance in two variants of the Radeon R9 380: one is a pure rebrand of the R9 285 whiles the other one is the first 4GB edition of the Tonga XT (finally, a decent amount of vRAM). The Curacao and Bonaire GPU can be found in Radeon R7 370 and R7 360 respectively. Here are the product codes and the specific SKU names:

We have also previously received information on the pricing of the Radeon R9 300 series so we have a very good idea of what to when they finally hit the shelves. AMD has an event planned on the 16th of June at E3 and will be launching the Fiji based GPUs there as well - something that will be very interesting to watch. AMD is using a whole lot of economics this generation and the pricing will most probably be optimized to undercut competing Nvidia GPUs while keeping a high enough margin.