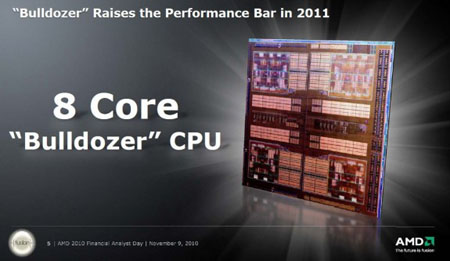 According to X-bit Labs it has been revealed that AMD will be releasing its new FX Line of processors based on the Bulldozer architecture in June. AMD will release a total of Eight models of the CPU of which four are hexacore models with eight cores, two six-and two quad-core processors.

The new Bulldozer based FX CPUs will be built on a 32Nm Process integrated with DDR3 memory controller and will give 50% better performance on the same clocks as compared to the previous gen Phenom based processors.

AMD is also planning to release its Llano based APU's (Accelerated Processing Units) from July which come in both dual and quad core models and all equipped with integrated graphics processors. AMD hasn't confirmed this news yet but it's likely they would call in a conference on this soon.