Considering the old RX 580 has 2304 stream processors and is based on the same approximate node (the 12nm FinFET,  is an enhanced version of the 14nm process, even though the name might suggest otherwise)  we are looking at athe same core count and some additional few percentage points because of slightly higher clock speeds. All in all, you are looking at anywhere from 1%-5% real life gain under normal circumstances. This kind of performance level is something we have already seen before, in the leaked FF XV benchmarks of the Radeon RX 590, where it fares a lot better than the RX 580, indicating it's in fact, the same GPU.

In 4k High benchmarks (the go-to standard for eliminating CPU bottleneck and squeezing every inch of performance out of the GPU) the RX 590 easily beats out the GTX 1060 and even manages to deck out the Radeon Pro Vega 64. It does, however, score below the Radeon Pro Vega 56 (which I assume is related to clock rate). The GTX 1060 was the staple of NVIDIA’s budget/mainstream offering and has been the 1080p king for a long while. The 4K standard and 4K lite benchmarks: 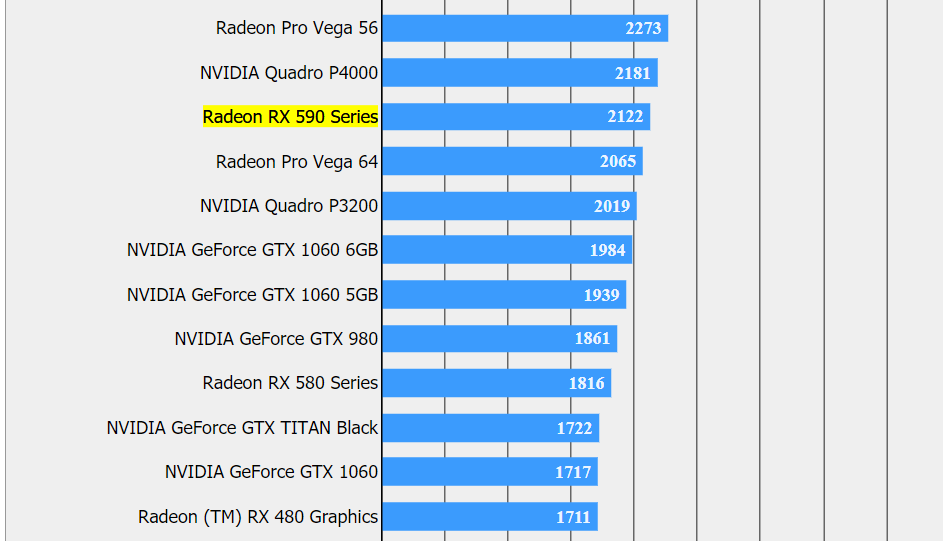 Depending on how AMD prices their RX 590, the GTX 1060’s reign will certainly be over and could even put a dent in 1070 sales. It looks like we have a new 1080p king and it bleeds red. Benchmarks in 1440p and 1080p also tell the same story so I expect this result to be replicated easily in other games as well.

Is this the AMD Polaris 30 chip?

AMD has also hinted that they will be releasing a product every quarter and since Navi is not going to be landing this quarter, this seems to be the perfect pit stop for AMD to take a breather at. The Polaris 30 GPU was originally slated to be a refresh of the Polaris 20 part which was launched in 2017.

AMD Polaris 30 will be based on the 12nm FinFET process and you can expect a 5% performance increase from the process upgrade and slightly higher clocks. It’s worth keeping in mind that 12nm FinFET is essentially just an enhanced version of the old FF process and not an entirely new node in itself (that would be 7nm). AMD will not be rolling out its 7nm Vega 20 GPU (which won’t be coming to the gaming market anyway) until the 12nm refresh lineup is launched so it fits in there as well.

As for why this series wasn’t on AMD’s roadmap – there is a very easy explanation for that. Polaris 20 lineup wasn’t on the roadmap either – till it was suddenly refreshed in 2017. So the fact that the Polaris 30 GPU family is not present on AMD’s roadmap doesn’t really take any credibility away from this rumor considering the company’s past actions. Polaris 30 would allow the company to tighten its foothold in the budget segment as well as the mobility side with more power efficient (and cheaper!) GPUs.

It is sort of ironic how AMD’s philosophy is the exact opposite of NVIDIA. We fully expect the Polaris 30 lineup to be slightly faster but also slightly cheaper than the already cheaper RX 500 series making it ideal for entrants to PC gaming and/or gamers on a budget that can’t afford to spend an arm and a leg on a PC build. The companies’ RX 500 lineup represents a strong but slow burn and a foothold for the company – which it really should focus on retaining till it can get Navi into the hands of gamers by 2019.