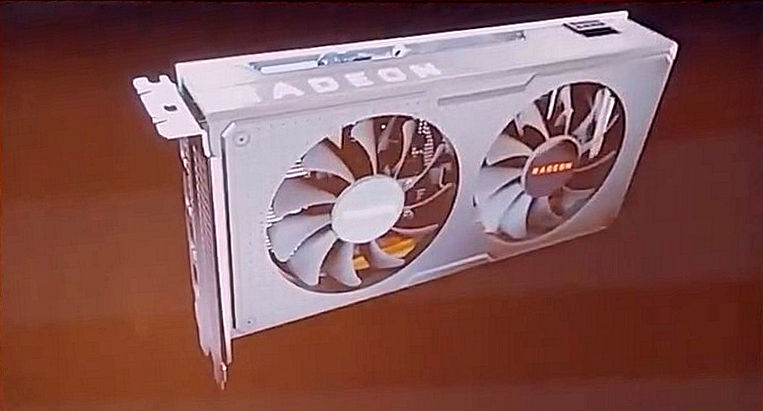 AMD's official presentation for their upcoming Radeon RX 500 series graphics cards has leaked out. The leak while posted over at Chinese forums was reported by Videocardz and showcased specifications and gaming performance numbers of several Polaris based variants. 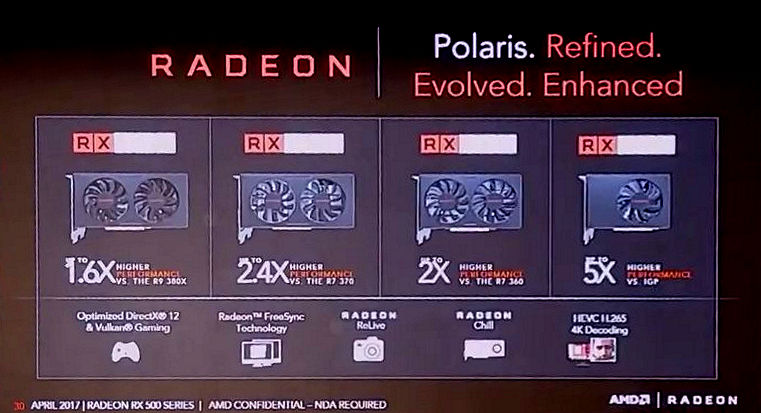 The AMD Radeon RX 500 series will also be utilizing a refreshed reference cooling system. All cards except the Radeon RX 550 will use dual fan cooling solutions as standard which means better cooling. AMD has also updated the power configuration on their cards meaning that these card will offer even higher stable operation under load and will be able to overclock decently. 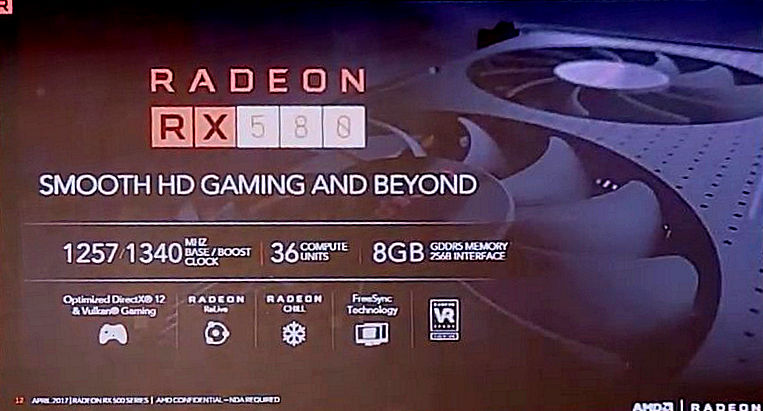 AMD is comparing the Radeon RX 580 against the Radeon R9 380X and custom GeForce GTX 970s. The same cards were also compared against the Radeon RX 480 however the RX 580 will offer better gaming performance than these since it's based on a refined core with higher clock speeds. We are looking at a GPU capable of over 60 FPS at 1440P in several titles at a very affordable price range as mentioned in previous posts.

The Radeon RX 570 will also be featuring the Polaris 20 GPU but a slightly cut down variant known as Polaris 20 XL. This card will be similar to the RX 470, featuring a cut down Polaris core with 2048 cores. The card will additionally feature a clock at 1244 MHz boost which would yield compute output more than 5 TFLOPs. 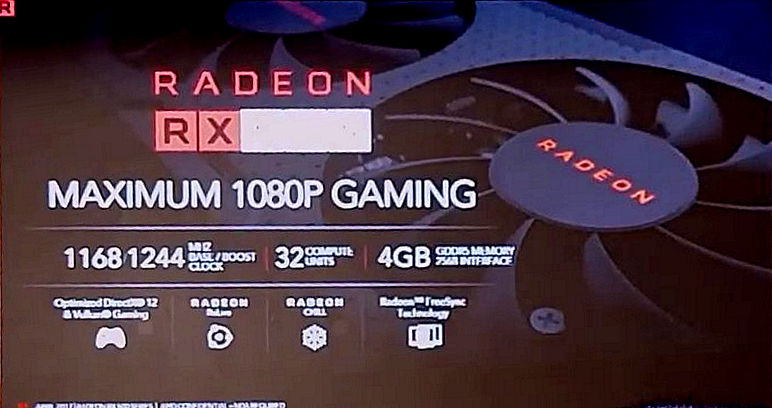 In terms of memory, we are looking at up to 8 GB of GDDR5 which will be clocked at a 7.0 GHz clock to deliver 224 GB/s bandwidth. Power will be provided through a single 6-pin connector on the reference models so expect to see several 6+6 pin custom models.

The card will also be available in 4 GB models. Pricing wise, the card will cost around the $169-229 US price range.

The AMD Radeon RX 570 will be offering the best visuals and performance on 1080P resolution with a 4 GB GDDR5 frame buffer. Just like the Radeon RX 470, the Radeon RX 570 will offer smooth 60 FPS gaming performance at 1080P resolutions with settings maxed out in a range of titles. However, the titles need to be optimized within AMD's Radeon Software for best experience in AAA and VR titles. 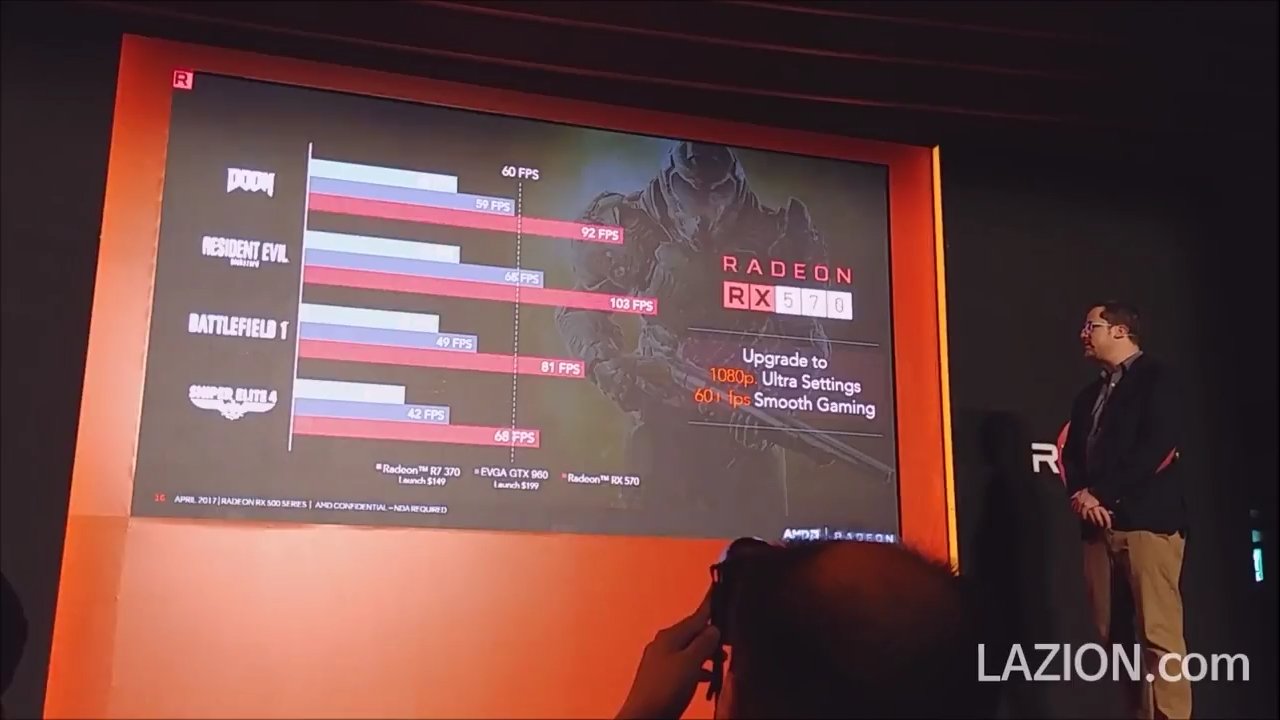 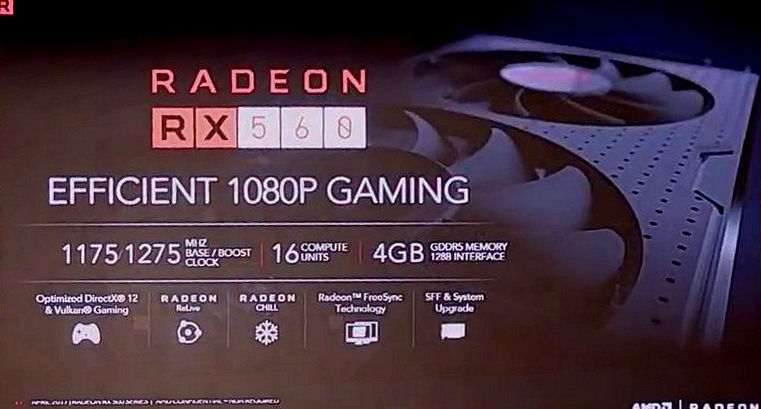 As for clock speeds, the Polaris 11 chip will be clocked at 1175 MHz base and 1257 MHz boost clocks which would mean we are looking at just about 2 TFLOPs of (FP32) computing performance. The card will be available in either 2 GB or 4 GB variants and would come clocked at 7 GHz along a 128-bit memory bus. The card will deliver a theoretical bandwidth of 112 GB/s which should be enough to feed the entry level card. As for pricing, we can expect it to be somewhere between $110-$120 US.

The AMD Radeon RX 560 will be aiming for the efficient 1080P gaming range so we can expect this card to be perfect for eSports and MOBA titles which are really popular among the PC gaming masses these days. It seems like the Radeon RX 560 will be replacing the Radeon RX 460 and besting it out in all ways possible. You get a higher frame buffer by reference design, faster clock speeds, lower power input and a range of other Radeon specific enhancements. 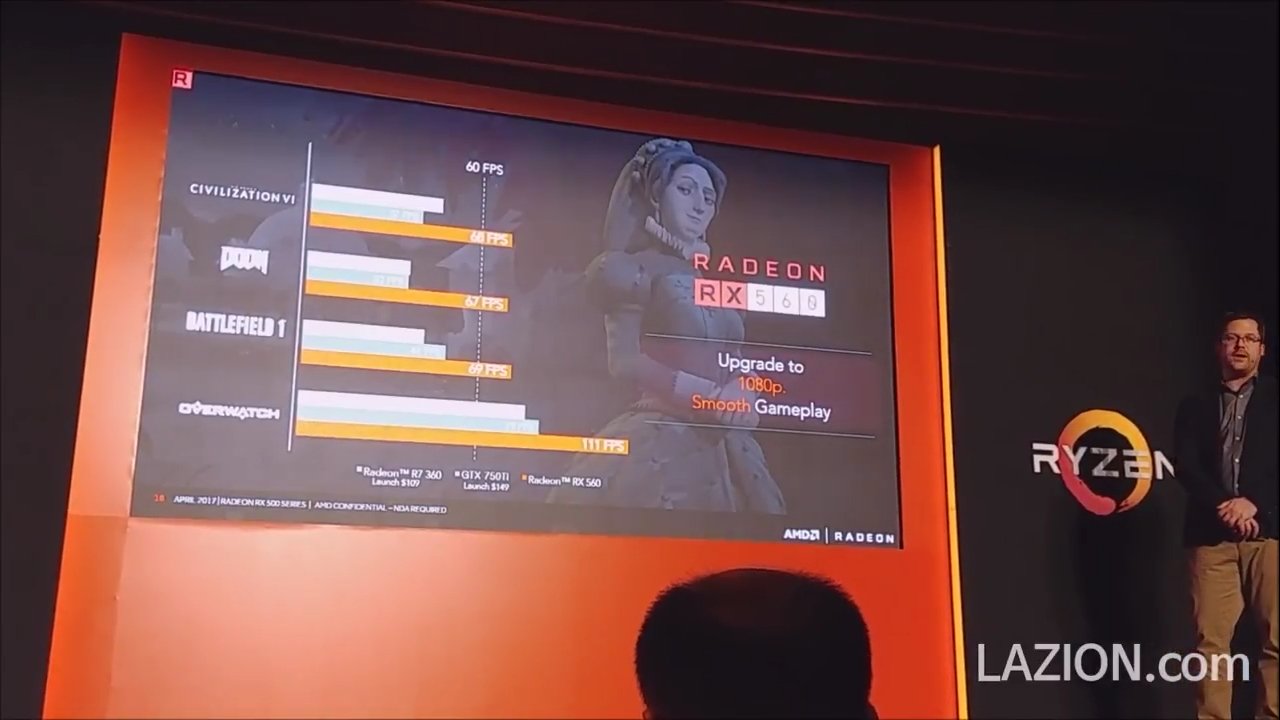 The AMD Radeon RX 550 is based on a new Polaris GPU known as Polaris 12 and internally known as Lexa Pro. This card will feature only 512 stream processors, 32 TMUs and 16 ROPs. As for boost clocks, it will run around 1183 MHz while the memory will be configured at 7.0 GHz. The 2/4 GB GDDR5 memory will operate along a 128-bit bus and deliver 112 GB/s bandwidth. For this low-end card, we can expect a price below the $99 US range. 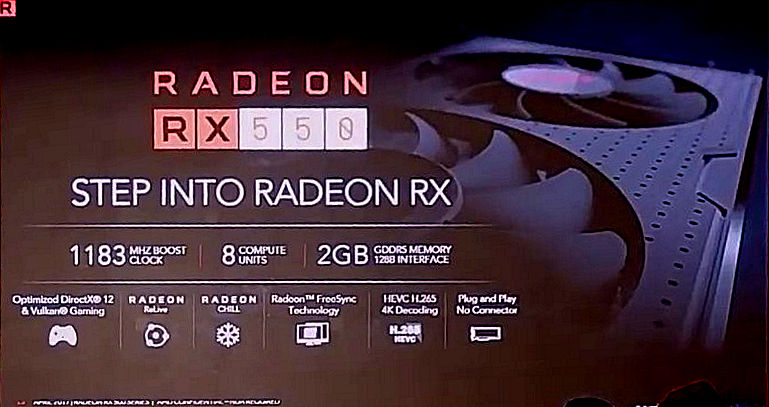 AMD has also stated in their presentation that the Radeon RX 550 will be available in low profile form factor which is splendid for users who want to built mini desktop PCs for video streaming and regular gaming workloads. 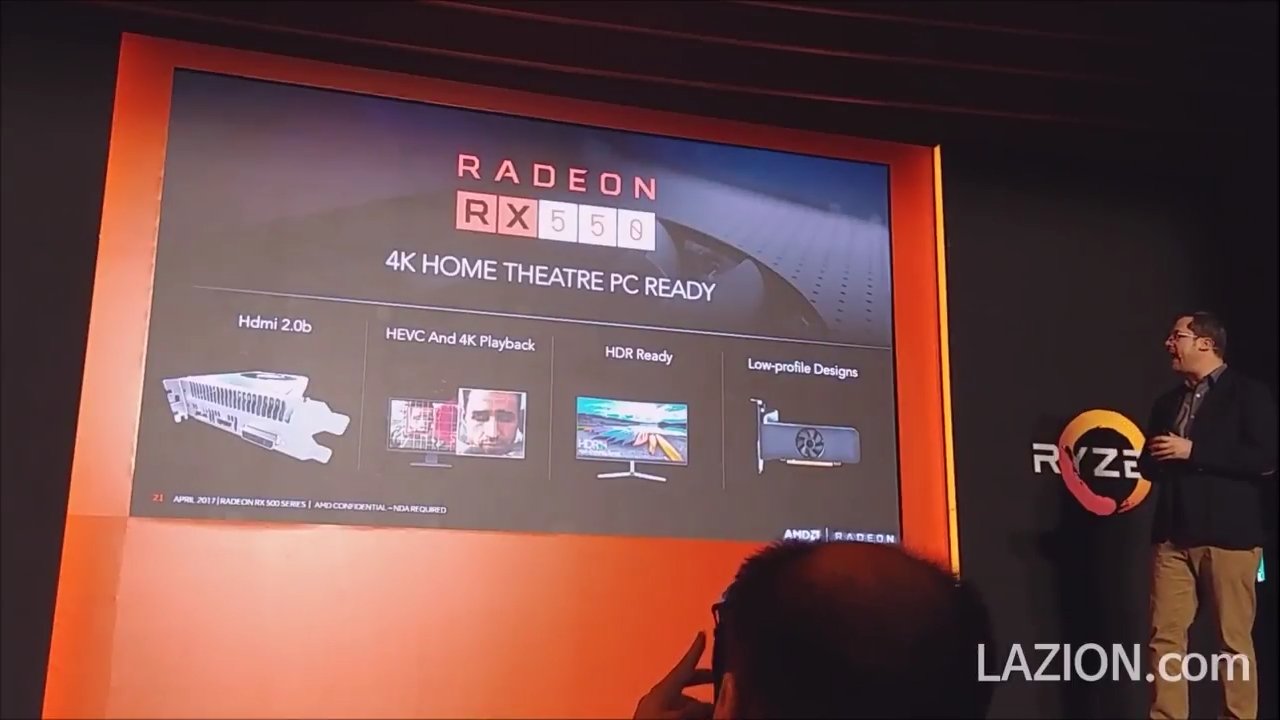 The AMD Radeon RX 550 is the newest of the bunch and AMD will be aiming this at PCs which lack a discrete GPU, meaning that it's supposed to be really affordable and targeted at the less than $99 US market. The performance details show that the Radeon RX 550 obliterates the much older R7 250 that utilizes the Oland GPU architecture while the Intel HD 530 integrated chip on several Intel Skylake processors is of no match against the discrete solution. 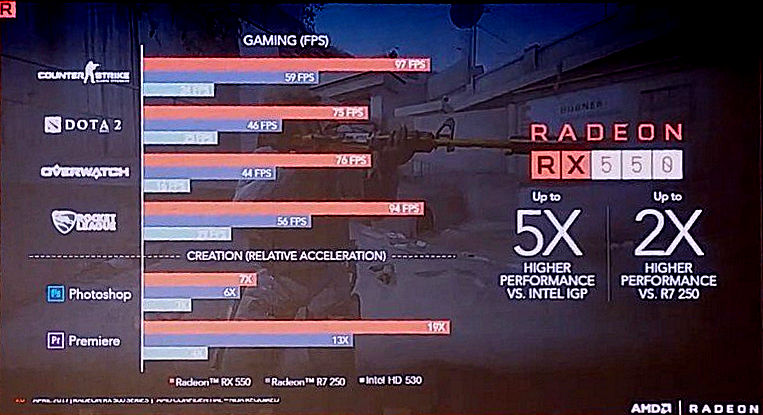 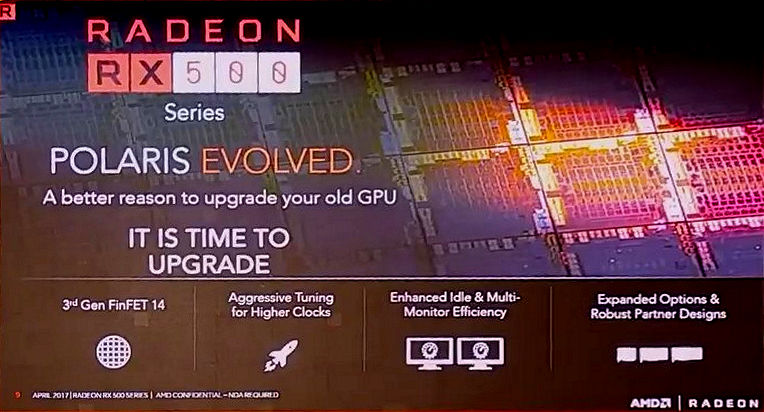 Aside from performance updates, the refreshed Polaris lineup will be fully compatible with AMD Radeon FreeSync, Radeon Relive, Radeon Chill, Optimized DirectX 12 / Vulkan drivers and support HEVC H.265 4K decoding. Expect to learn more information on these cards when NDA ends on 18th April. For additional performance benchmarks on the Radeon RX 500 series cards, you can head over to our article here.