AMD recently held a large display of Radeon RX series graphics cards from their partners at the ChinaJoy 2016 event. The event featured AMD partners like ASUS, XFX, Colorfire, Dataland, Yeston along with several others who showcased their latest custom boards featuring the Polaris architecture. While some brands will be made available in global markets, the Chinese brands will remain limited to the Asia Pacific market.

The Radeon RX 480 has officially been launched around the globe since 29th June and a couple of custom cards are already available in the market. ASUS, MSI, Gigabyte, Sapphire and Powercolor have already released some great custom cards which utilize custom PCBs and coolers that offer great performance to end users.

AMD AIBs are also releasing more custom RX 480 cards soon, mostly for the Chinese market which are detailed along with the first Radeon RX 470 and Radeon RX 460 custom variants which will be available in August. Some models were already detailed by us in previous articles which can be seen in the links below:

The Radeon 480 is based on the Polaris 10 GPU that launched on 29th June. This card has been available in the market for over a month and has been a very competitive card with its great price to performance value. AMD's Polaris 10 GPU features 2304 stream processors and up to 8 GB GDDR5 memory clocked in at 8 GHz to deliver 256 GB/s bandwidth. The card costs $199 US for the 4 GB and $229 US for the 8 GB model. You can check out the latest custom models along with their details below:

The Dataland Radeon RX 480 X-Serial OC is a very high-end model that is designed to offer better overclocking support. The card features clock speeds of 1278 MHz base and 1330 MHz boost clock while the VRAM clocks in at 8000 MHz. The card is only available in 8 GB variants which feature a 256-bit bus and 256 GB/s bandwidth. Display outputs include 3x Display Port 1.4, 1x HDMI 2.0b and a single DVI-D connector. The card has a custom PCB that houses a 6+1 Phase PWM and is powered by a single 8-Pin connector.

The design for this card is really impressive, featuring a large cooler shroud that embraces a red and black color scheme. The shroud extends the length of the PCB and houses three large PWM controlled fans. These fans are used to push air to a large aluminum fin array heatsink with 4 copper heatpipes that dissipate heat off the GPU core. This model should ship around a price of $289 US which seems reasonable for a highly customized design.

The Maxsun Radeon RX 480 Jetstream graphics card is another variant that features a triple fan cooling design. This is a very beefy variant but Maxsun stated that is should cost less compared to other triple fan solutions of the RX 480. The card has a matte black finish on its shroud with red texturing. Three fans that look like ASUS's design are featured on the card. Underneath the shroud is a large heatsink which cools off the custom PCB and powered by a single 8-Pin connector. Expect clock speeds around 1300 MHz on this card. 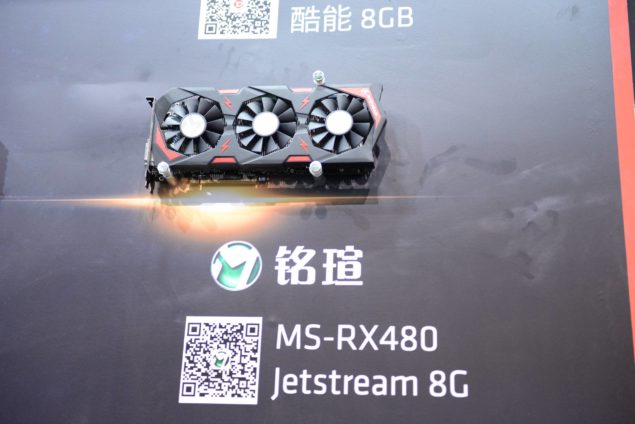 Yeston is also offering their new Radeon RX 480 Gaming Top graphics card which will be available in 8 GB GD5 variant. The card has a red colored plastic shroud that incorporates two spiral design fans. The card looks like it features a custom PCB that would be powered by a single 6-Pin connector and should cost around $250 US. It's I/O connectivity includes three Display Port 1.4, 1x HDMI 2.0b and a single DVI-D connector. 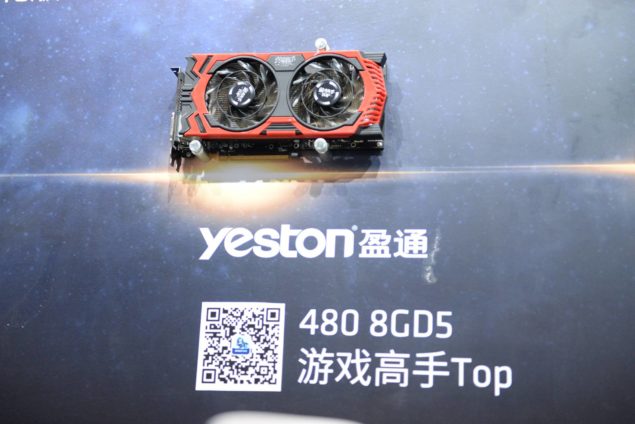 Colorfire is back with a bang with their XStrom series graphics card. The last model we saw was their Radeon R9 280X model three years back and it's great to see them offering a new model with a revised cooler. Colorfire is Colorful's sister brand which only manufacturers custom Radeon graphics card. The card has a triple fan design with a very beefy heatsink. The card measures three slots and is powered by dual 8-Pin connectors. It should feature some impressive clock speeds as the custom PCB allows better overclocking support to enthusiasts and modders. 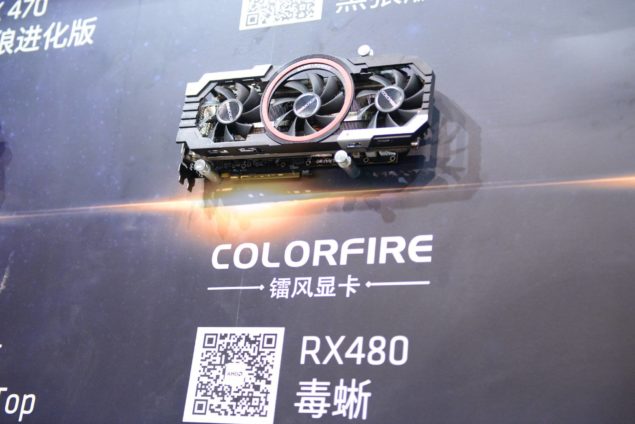 Since this card is a high-end variant of the Polaris 10 GPU, it should cost around $299 US and will be available later this month. Colorfire only exists in Chinese markets but it is possible to see some of these cards selling in EU markets.

The Radeon 470 is based on a cut down Polaris 10 GPU and launches on 4th August. AMD's Polaris 10 Pro GPU features 2048 stream processors and up to 4 GB GDDR5 memory clocked in at 6.6 GHz to deliver 211 GB/s bandwidth. The card is expected to cost around $179 US and should be available in a load of custom variants right on launch.

Dataland is preparing the Radeon RX 470 Dual cool solution which will be available on 4th August along with several other custom models. The Radeon RX 470 Dual Cool features a black colored shroud that houses two double blade III fans that come with mute fan technology that allow the card to run at 0dB when the card is running under normal gaming load and under 60C. This model should be available in 4 GB variants with price close to $179 US. Clock speeds are not known but memory would be clocked at the reference 6.6 GHz clock.

Just like the Dataland Radeon RX 480 X-Serial, the RX 470 X-Serial is also a very high-end model that is designed to offer better overclocking support. The card will only be available in 4 GB variants which feature a 256-bit bus and 211 GB/s bandwidth. Display outputs include 3x Display Port 1.4, 1x HDMI 2.0b and a single DVI-D  display connectors. The card has a custom PCB that houses a 6+1 Phase PWM and is powered by a single 6-Pin power connector.

The Radeon RX 470 Silver from Sapphire is a reference card featuring a custom cooler design. The cooler might seem like a reference design but is slightly modified with a silver texture and a glowing Sapphire logo on its side. The Sapphire Radeon RX 470 comes with 4 GB GDDR5 memory clocked at 6.6 GHz to offer 211 GB/s bandwidth.

The card features a 4+1 phase PCB compared to 6+1 on the Radeon RX 480 PCB. Both cards use the same board but different components due to cheaper cost of the Radeon RX 470 graphics card. Power is provided by single 6-Pin connector while display connectivity includes three DP 1.4 and a single HDMI 2.0b connector. There's also a backplate that looks great and something missing on the reference cards. The card should cost the same as a reference model when it launches next week.

XFX is ready with their own custom Polaris 10 Pro solution, the Radeon RX 470 Black Edition. The card features their Black edition cooler with two massive 90mm fans that are PWM controlled and blow air inside a large heat dissipation chamber that incorporates massive heatpipes. The board features XFX Duratec DNA that comprises of high quality components to offer better stability and overclocking support. Power is provided through single 6-Pin connection.

The card features an all black design since it is labeled as Black Edition. Display outputs include 3x Display Port, 1x HDMI and 1x DVI-D. There's also a backplate on this card that looks great along with an XFX logo that lights up when the card is operational. Expect pricing of this card close to $179 US along with some good factory OC numbers.

Last up, we have the ASUS Radeon RX 470 STRIX. This is the first ASUS DirectCU variant that uses a dual fan cooler instead of triple fan and it makes sense since the Polaris 10 GPU is very power efficient and the 120W TDP is enough for this cooler to handle. The card has the same texture and design patterns of the DirectCU III on a smaller footprint but price to performance should be a key factor for this card as it is entering the sub-$200 US market. The card features a custom PCB that is powered by a single 6-Pin connector and looks great. 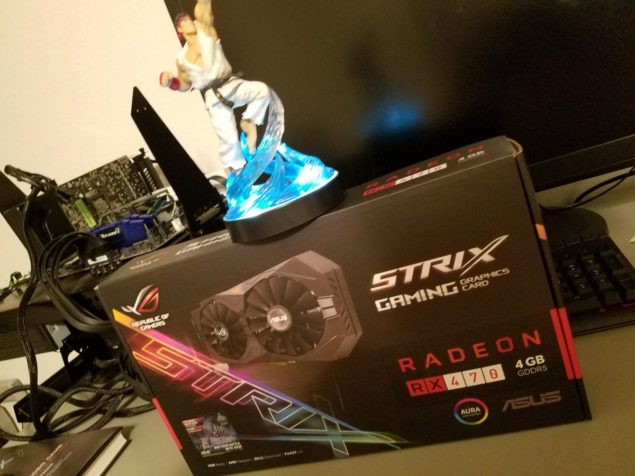 The Radeon 460 is based on the Polaris 10 GPU that launches on 8th August. AMD's Polaris 11 GPU features 896 stream processors and up to 4 GB GDDR5 memory clocked in at 7 GHz to deliver 112 GB/s bandwidth. The card should cost $99 US for the 2 GB and $119 US for the 4 GB model. You can check out the latest custom models along with their details below:

The Sapphire Radeon RX 460 Dual graphics card is a very small card that features the Polaris 11 chip. This card has two 80mm fans that push air to a metallic heatsink block that covers the entire custom PCB. The card does not require any additional PCI-e connection to boot since it has a TDP less than 75W. Display connectivity comes in the form of a single DVI, DP and HDMI connector. 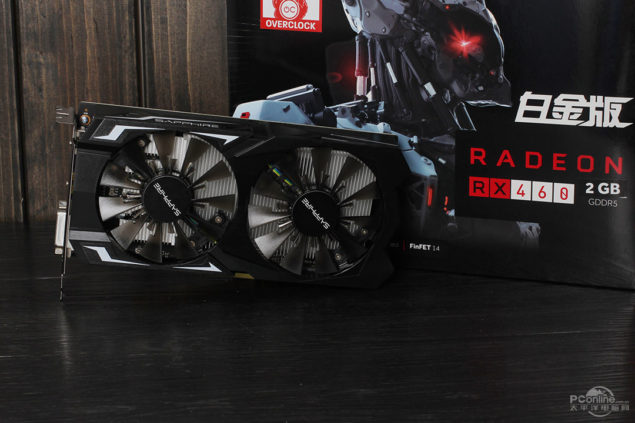 A more detailed look is offered by PCOnline who dissected the card and gave us a good look at the PCB. This is also the first look at the Polaris 11 die which is very small and efficient. This is supposed to be the fastest GPU under $150 US. The PCB is a 3+1 phase design with a very neat layout as half of the PCB is bare of any electrical component. The card being a custom model should retail around $119 US.

Sapphire's Radeon RX 460 Nitro OC graphics card has also been pictured by Videocardz. This card is also a fully custom design and features a better PCB compared to the Dual model. This is the same cooler featured on the higher end RX 480 and RX 470 models. The heatsink comprises of two heatpipes which should be enough for the Polaris 11 chip. Also to note is that this model is a 4 GB variant which should be priced a big higher than 2 GB models and available on 8th August.

Finally, we have the XFX Radeon RX 460 double dissipation which is a custom card using a dual slot, dual fan cooler scheme. The card has the cooler extending the length of the PCB and uses no additional PCI-e power connector to boot. The card has the red and black color scheme which we have seen on Radeon R9 380 and 380X cards previously. The dual fans push air towards a metal heatsink block which cools the GPU, VRM and GDDR5 modules.