Last year, open-source developers and contributors for the Mesa AMD Radeon Vulkan (RADV) driver were experimenting with support for a new mesh and task shader for the graphics support.

The Vulkan API developers plan to implement more functional mesh shading for additional vendors and hardware drivers. The Vulkan mesh shading support is currently processed using the NVIDIA NV_mesh_shader extension. However, supporting multiple vendors would be great for several platforms outside of NVIDIA and their immediate partners. 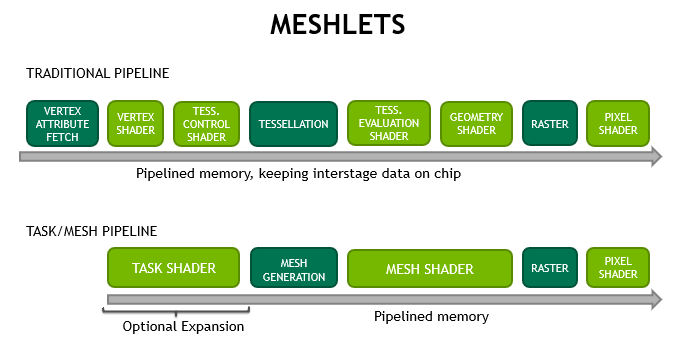 Mesh shaders work by combining vertex and primitive processing to create an essential modification to the graphics rendering channels worldwide. NVIDIA has continued support for their mesh shaders since the Turing era, and rival AMD included their shading technology with the AMD Radeon RX 6000 series graphics cards that use RDNA2 technology. Intel is entering the mesh shading updates for their ARC Alchemist and DG2 graphics processors.

It has been officially confirmed that a Vulkan cross-vendor mesh shading extension is coming soon. While I can’t give you any details about the new extension, I think it won’t be a surprise to anyone that it may have been the motivation for my work on mesh and task shaders. Once the new extension goes public, I will post some thoughts about it and a comparison to the vendor-specific NV_mesh_shader extension.

Currently, the NV_mesh_shader extension is the only mesh shading support available on open-source platforms. We should expect the official Vulkan extension for mesh shading in the next few months for AMD Radeon Vulkan drivers.

Timur has written several posts on his blog that give an inner look at the processes going into the new mesh shading. You can access his blog here, offering more technical specifications and details that only the author would be best to explain.