A few days ago, we detailed the latest AMD Radeon Software Crimson edition drivers which get rid of the old Catalyst Control Center and ushers a new era for AMD drivers. Today, a leak by Zolkorn reveals that the driver is headed for its public launch on 24th of November which is three weeks from now and users on the Radeon team should definitely be excited for the new software as it brings not only an advanced look to the software side but also packs tons of features which are detailed below. 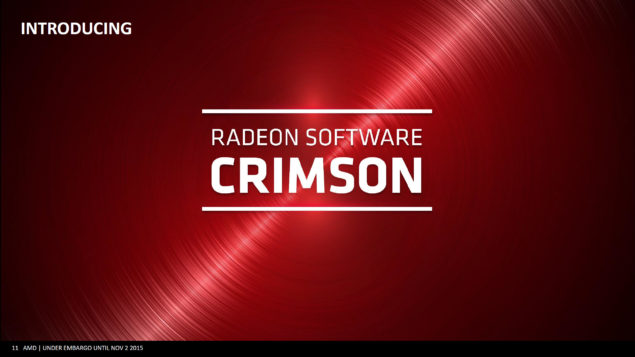 The Crimson driver update comes straight from the newly formed Radeon technologies group which is led by Raja Kadouri. The new graphics division is solely dedicated to graphics and graphics technologies featured on  AMD’s APU, discrete GPU, semi-custom, and GPU compute products. The first product of this newly founded graphics division comes in the form as a Radeon Software update known as Crimson which is replacing the old Catalyst drivers which AMD users had become accustomed to since 2002. Since then, AMD has brought key innovaations to the market from their software department in the form of CrossFire, OpenCL, Eyefinity, Never Settle (performance focused) drivers, Mantle API and LiquidVR. Since its launch, AMD's Catalyst Drivers have been downloaded over 1 Billion times but the ever changing ecosystems of PCs has demanded a new update from AMD to their drivers with competitor NVIDIA already offering GeForce Experience with their drivers as a utility that offers a lot more than just graphics productivity and management.

So after 13 years of Catalyst, AMD is finally shifting their Radeon drivers to a new advanced software known as Radeon Software Crimson. The naming scheme of the the new driver is pretty simple, the drivers from now on will have "Radeon Software" as the main name/title for the product and each major version will get a unique code. The latest one is Crimson Edition which will be pushed in the year 2015 up till 2016. Last thing to note in the naming convention is the minor version code which will be pushed regularly with each AAA game launch or add bug fixes. The current version which is coming out on 24th November will have the 15.11 naming scheme (15 = Year and 11 = Month). This naming scheme is easier to remember and as the first round of Crimson driver don't promise any massive performance increases over the Omega edition drivers, they do get a redesigned interface, refined navigation system and faster loading times.

This brings us to the next major feature of the Radeon Software Crimson edition drivers known as the "Radeon Settings". There are a few key things to note within the Radeon settings and all of them are detailed below:

First of all, we take a look at the sleek new brushed metal design which is featured on the new Crimson edition drivers and it looks superb. The Crimson edition drivers not only come with a fresh look, but they also feature a faster boot time (up to 10x faster) than Catalyst Control Center. For instance, it took  AMD's CCC an average of 8 seconds to boot up while it takes Radeon Settings just 0.6 seconds to boot up which is a significant update to start up time. 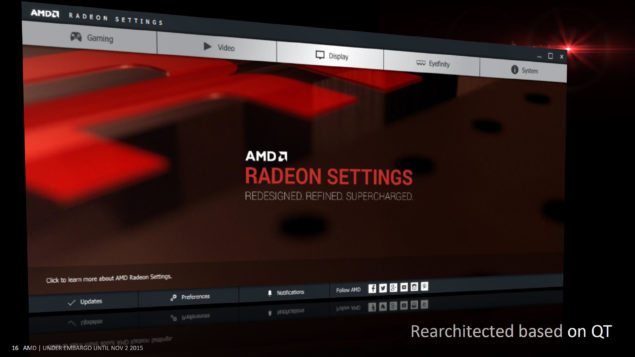 The home screen for Radeon Settings software is filled with a ton of features that can be adjusted either from going in the system tray or directly from the Software panel. The top panel has five categories listed (Gaming, Video, Display, Eyefinity and System). The large banner in the middle can display AMD/Radeon ads and comes with a banner text and unique URL. Of course, if one doesn't like ads showing up in this space, they can put up their own banner in this space and AMD has provided instructions on how to update this panel and will further provide additional ads that lead to their respective URL for upcoming and newly launched products by AMD.

There are some options in the bottom panel too which provide updates, preferences, notifications and Social links that are linked back to official AMD channels on Facebook, Twitter, Google+, etc. The updates panel is through where you will check the status of your drivers whether they are up to date or new drivers are now available to install. You can either manually check the updates or leave the utility to automatically detect for updates every two weeks. The Notifications panel will provide general notifications such as errors, general messages and marketing notifications. These can be cleared after checking them for a clutter free section.

The mew Game Manager panel in the Radeon Settings Software is where you will be able to view all of your installed games and you can also customize graphics settings from this panel. The Game Manager panel is built with a new per game customization software where you can store profiles for each specified game to run it on your desired graphic settings. You can adjust from here Anti-Aliasing levels, Tessellation levels, V-Sync property and frame rate target control to conserve power on your PCs.

Further part of the Game Manger panel is Overdrive which is a renowned tool for Catalyst users. Through the overdrive software, you can configure unique overclock settings for each game specified so that when the title runs, it will automatically make the graphics card run on the desired overclock frequency which was selected / adjusted by the user through the overdrive menu. 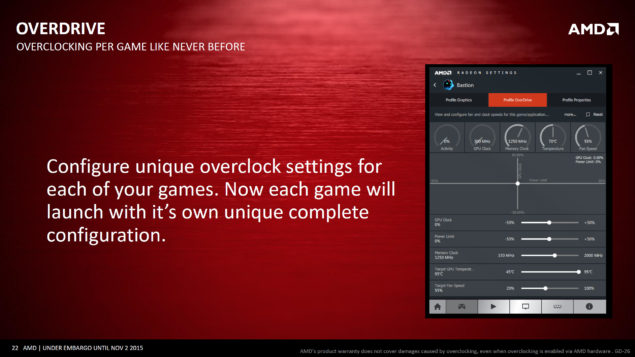 Settings in the Overdrive menu range from GPU clock adjustments up to Power Limit, Memory Clock and Fan speed adjustments. This is kind of a small overclocking utility which is both robust and stable for Radeon cards and you can check based on the statistical data being provided to note what kind of performance benefits you might get in the specified title when overclocking your graphics card. GPU monitoring tools such as GPU clock, activity, memory clock, temperature and fan speeds are also displayed in the overdrive menu.

Moving on, we have the Video panel as part of the Radeon Settings Software which has several optimized profiles that can be used to enhance your video experience through a single click. The profiles range from Default, Cinema Classic, Enhanced, Home Video, Outdoor, Sports, Vivid and Custom. Within the custom profile, users can adjust the sharpness, color vibrance, brightness and can enable/disable AMD features such as Steady Video and Fluid Moition. You can save these profiles with any name you like or run a demo video to see if the settings you selected meet your preferences.

There's also a display configuration menu where one can get information of all the displays connected to the PC. If your monitor comes with Freesync technology, you can enable or disable it through a slider. Additional settings include the very useful, AMD VSR (Virtual Super Resolution) which is downsampling to allow monitor to render images at higher resolutions than the default supported resolution of the panel. There's also GPU scaling and Scaling mode settings which can be adjusted by the user.

Finally we have the last two settings of the Radeon Software Crimson Edition driver which include Eyefinity and System Information panel. The Eyefinity panel is where you will adjust your multi-display configuration to run in Eyefinity mode. You can choose from Quick Setup which provides a pre-selected list of configurations to select from or you can choose Advanced Setup and make your own custom Eyefinity setup. The system info panel provides details such as CPU name, GPU name,  amount of memory installed, Windows Version and Radeon Driver version. There are three panels to choose from, the Overview gives a small list of system info while detailed look can be found from Software Info and Hardware Info panel.

Unfortunately only small performance improvements and stability improvements of the actual underlying driver are expected with this release. But again, this is part of AMD’s initiative to try to make their software just as powerful as their hardware. It’s easily been dismissed in the past, but now even the user interface is under scrutiny, and AMD is more than willing to fix that for us in their Crimson update. And really, this is only the beginning and while we won’t see massive performance boosts in games as a result of this, it’s a step towards bringing their driver interface to parity with NVIDIA and is a look at the future.