AMD annouced their latest Radeon R9 290X graphic card at the GPU '14 event which is the fastest card the company has built yet. Based on the Hawaii architecture, the Radeon R9 290X and Radeon R9 290 would be delivering amazing performance and technologies for users to experience including a totally new AMD Cross-FireX technology. 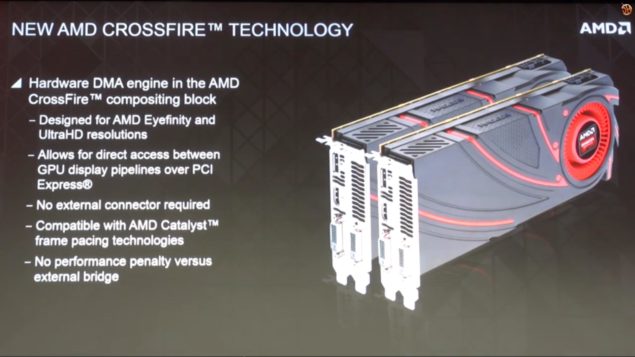 Since the release of the Radeon X1900 by ATi, AMD have been using the Crossfire Bridge to facilitate multi-GPU functionality. Prior to the introduction of the Radeon X1900 when AMD (ATi at that time before acquisition) had released their first PCI-E Radeon cards which used the PCI-E bus for communications rather than an external port or connector however a master card was required for full functionality of CrossFire which were expensive. NVIDIA at that time had already moved to SLI (Scalable Link Interface) that allowed to  end bandwidth constraints of the PCI-e interface and send data between both graphics cards directly with the use of an external connector.

While both companies have been using SLI and CrossFire bridges with their GPUs since a while to enable upto four way multi-GPU functionality, its AMD that seems to return to a bridge-less era for multi-GPU functionality with their latest Radeon R9 290X GPU. A few days prior to the GPU '14 event, pictures of the AMD Radeon R9 290X leaked on the internet showcasing two standard CrossFireX gold fingers but to our knowledge, that was an ES (Engineering Sample). When AMD officially introduced the card at the event, we were quite stunned to notice the missing CrossFire ports but it was a hint at the new CrossFireX technology.

Thanks to a slide showed off in a video by Donanimhaber, it can be confirmed that the Sideport as found out by Videocardz is being used on the Hawaii GPUs. The AMD Sideport technology was meant to debut originally with the ATi Radeon 4870 X2 but was never actually unveiled. The CrossFireX technology introduced with the Radeon R9 290X is similar to Sideport which would the GPUs to communicate over through the PCI-Express bus rather than an external connector. Previously, NVIDIA and AMD made a move to bridged connections to reduce the bandwdith issues faced on the first generation PCI-e slots but the PCI-e 3.0 bus available today has enough bandwidth to once again enable the use of sideport. 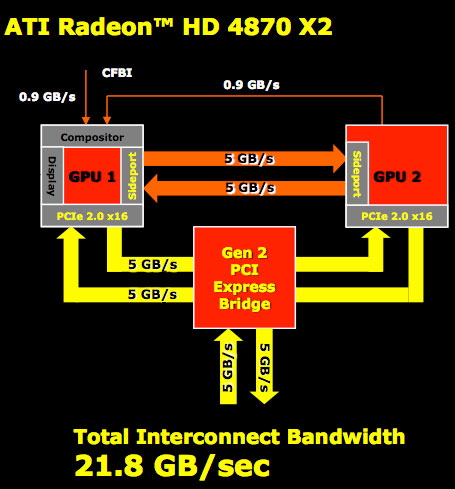 AMD mentions that the new CrossFire technology for AMD Radeon R9 290X is designed to for AMD Eyefinity and UltraHD (4K) resolution setups. The new technology, as mentioned before allows for direct access between GPU display pipelines over PCI-Express hence no external connectors are required. The technology is fully compatible with AMD's Catalyst frame pacing technologies which help reduce frame pacing issues faced with Multi-GPU setups which have been a massive problem with the Radeon 7000 series. Lastly, the slide mentions that users would face no performance penalty by with Sideport versus traditional used external bridges for CrossFireX.

However, its not certain whether only PCI-e 3.0 has the bandwidth to fully support the new CrossFireX tech fused on AMD Radeon R9 290X since motherboards these days come with one or two x16 PCI-e 3.0 slots while the rest are usually x8 and x4. So a motherboard update would be essential when using upto four of the Hawaii GPUs. By 2015, motherboard makers would ship the first PCI-e 4.0 enabled products but that's still a year away from the launch of the Hawaii GPUs so we hope AMD would address this. The NDA for the Radeon R9 290X specifications officially ends on October 15th and that's basically when the card would either hit retail or final specifications for the card would be unveiled.