AMD (NASDAQ:AMD) announced its earnings for the first quarter of 2017, or the "Ryzen Quarter", and immediately saw its shares plummet to what is one of the worst crashes in the stock's history. Before we go into details of the market correction, a quick overview of the earnings: the company generated a revenue of $984 Million, which is a healthy increase from the same quarter last year (17%), on which it netted a loss of $73 Million on a GAAP basis ($38 Million on non-GAAP basis). Loss per share was 8 cents, and adjusted loss per share clocked in at 4 cents a piece.

Our Take On AMD (NASDAQ:AMD) - Earnings and Market Correction Analysis: Should You Buy?

Disclaimer: I own no stock in Intel and/or competing companies and have no plans to do so for the foreseeable future. The analysis and forecasts given here are provided “as is”.

At the time of writing, AMD's stock closed at $10.3, down 24.38% from the the $13.62 level just a day ago. In one day, the stock has wiped out almost 1/4th of its market-value making it the worst trading day in almost a decade of the company's stock performance. Support seems to have kicked in at the $10.3 level and appears to be holding although a slight downward trend can still be seen in after hours trading. The support levels for the stock are as follows:

The volatility of the stock remains very high and I would urge extreme caution while dealing with the stock in the short term. There will continue to be some pricing weakness in the stock, and I expect it to hit immediate support levels if things take a turn for the worst. The thing to keep in mind is that AMD's current price level is courtesy of a very heavy speculative premium. In other words, it was built on hype and while the company delivered solid financials, they weren't the multi-fold increase the premium asked for: which resulted in the market correction you saw. Before we go any further, here is a quote from the company's CEO on earnings day:

"We met our strategic objectives in 2016, successfully executing our product roadmaps, regaining share in key markets, strengthening our financial foundation, and delivering annual revenue growth," said Dr. Lisa Su, AMD president and CEO. "As we enter 2017, we are well positioned and on-track to deliver our strongest set of high-performance computing and graphics products in more than a decade."

Now that the price has taken a 24% hit, is it finally a good time to jump on-board the AMD(NASDAQ:AMD) ship? Well, there are arguments both for and against doing so and depends primarily on your risk appetite but one thing is for sure: do not take the crash as a discount, since it isn't one! This was a market correction to converge some of the hype towards reality and the vast amount of speculative premium (and therefore risk per dollar) will still remain. That said, the company's fundamentals are solid and have only grown stronger this quarter so it is still a go for the long term play.

AMD released its anxiously anticipated Ryzen architecture as well as revealed details about Naples and the Vega GPU this quarter. Ryzen 7 (in the start of the quarter) and Ryzen 5 (near the end) were both released and marked the first time the company had been competitive in the x86 segment in quite a few years. In fact, the processors offered an incredible value proposition to customers and more or less had delivered on what the company had promised. The company's Compute and Graphics segment saw a cool 29% increase in revenue, which is pretty great under normal conditions, and acceptable when considering Ryzen.

One of the major charges that caused the disparity between GAAP and Non-GAAP results is the charge of $342 million to WSA thanks to the 6th amendment, which basically ensures that Ryzen's supply is un-affected by any potential issues originating from Global Foundries. This is also one of the reasons why investors were probably expecting a more clear indicator of an AMD(NASDAQ:AMD) comeback in the x86 sector - which did not happen at the levels which justify such costs.

However, there are some caveats to this line of thinking. Ryzen has only just arrived and initially ran smack dead into some early teething issues with software and optimization. Not only that but the lack of motherboard supply meant that potential sales were lost this quarter due to the failure of AIBs to keep up with demand. Then there is the fact that our anecdotal evidence taken from in-house polls showed that the Ryzen 5 lineup has a lot of demand (potentially even more than the Ryzen 7) and was launched at the far end of the quarter where it could not nudge the bottom line by much.

All of these factors mean that the performance of Ryzen is still not in black and white (which is what the market is reacting like) as far as financial impact and growth goes, and will actually become clear in the next quarter. In fact, barring any unforeseen supply issues and both Ryzen 5 and Ryzen 7 lineups fully in the game, Q2 2017 will be a major turning point for the company's stock. It is with this in mind, that I would once again urge caution to any investors who do not have the appetite for this level of risk - if Ryzen does not show consistent and expected growth in the next quarter, then we could see the price blowing past more support levels as more of the speculative premium evaporates. 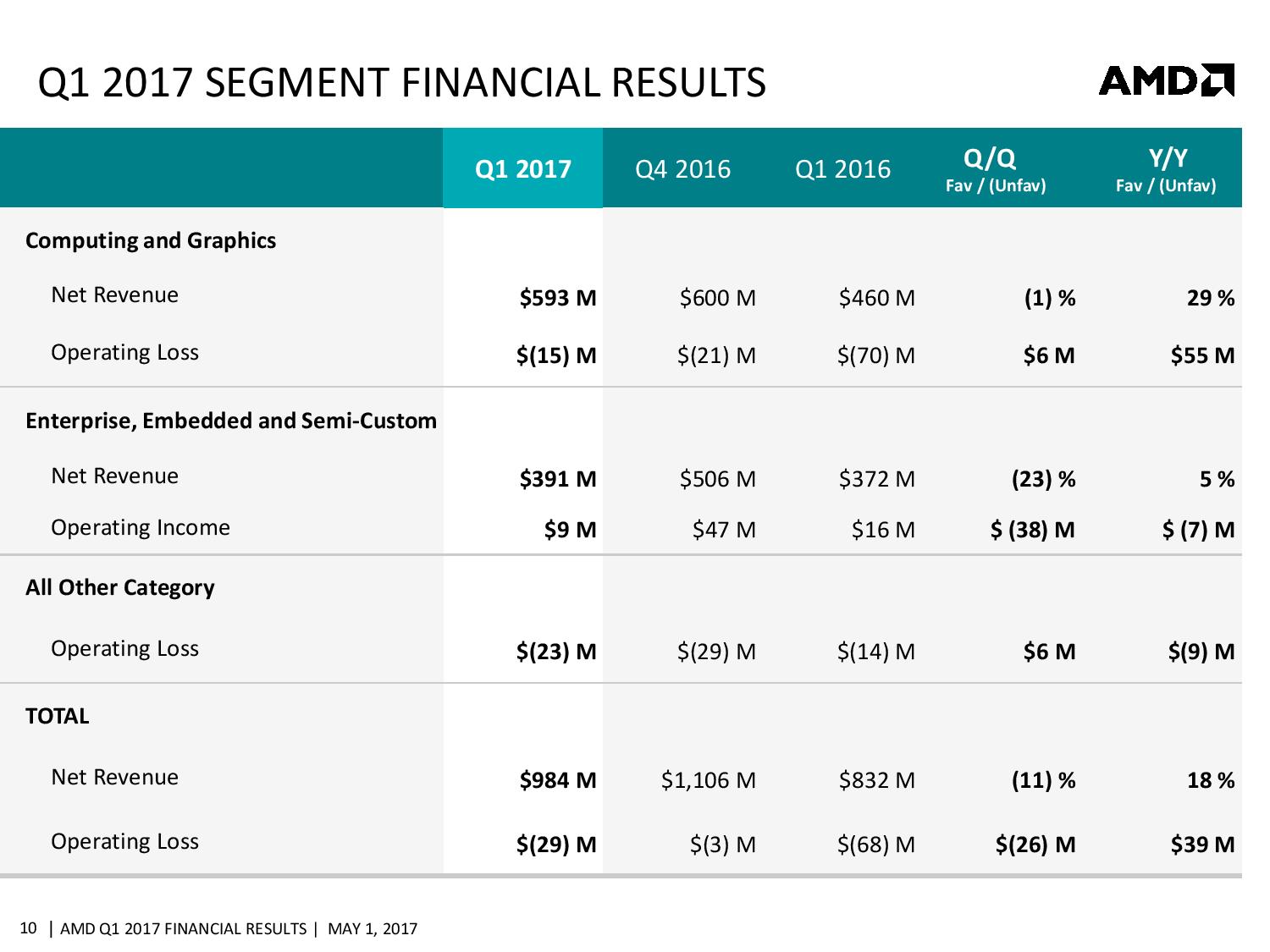