The tech enthusiasts have had their eyes on AMD ever since the first leaks about its upcoming Zen architecture began to leak out - but this is one of the first times that a large online retailer has given us a breakdown of historical sales figures by architectures - proving a conjecture many of us knew to be true. Mindfactory.de is one of the largest German retailers and represents a significant sample size to derive an analysis from.

The data clearly shows that the entire AMD comeback is on the back of Zen architecture alone. In fact, if you look at the chart you will see AMD's sales increasing sharply as soon as Summit Ridge (Zen 1) launched. In fact, AMD overtook Intel in market share for a very short period of time before 2018 as well. Here is what was really interesting, however, AMD's Zen architecture launched in 2017, but the customers of the German retailer were forgiving to Intel's CPU sales until 2H 2018 - which is the point where they apparently had enough. 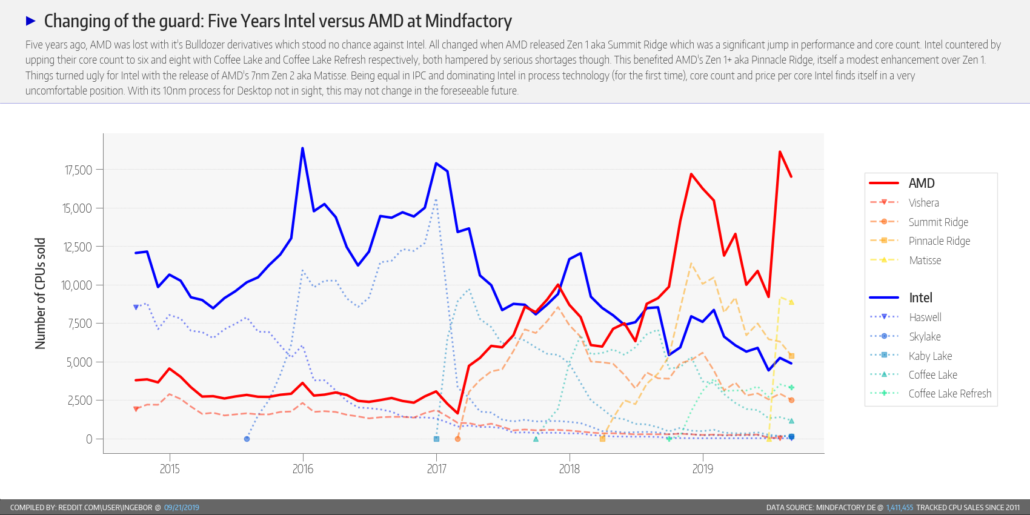 The chart above shows the number of CPUs sold and you can clearly see that with each successive generation of Zen (Summit Ridge, Pinnacle Ridge, Matisse) AMD has clawed more and more customers in Mindafactory.de sales. Here is where things get really interesting though, Matisse is AMD's HEDT lineup and traditionally while they generate a lot of revenue, they do not ship in the same volume as their mainstream counterparts. Here, however, we can see that Matisse is actually selling more than the first generation of Zen.

This is absolutely insane because it shows that AMD has managed to not only take market share in the old market dynamics but expand the total available market by creating a product that customers are now willing to buy (something Intel charged a heavy premium for before and believed there was no market for). Matisse's performance is evidence that the PC industry is far from dead and just needs the occasional innovation impetus to propel it to new heights. 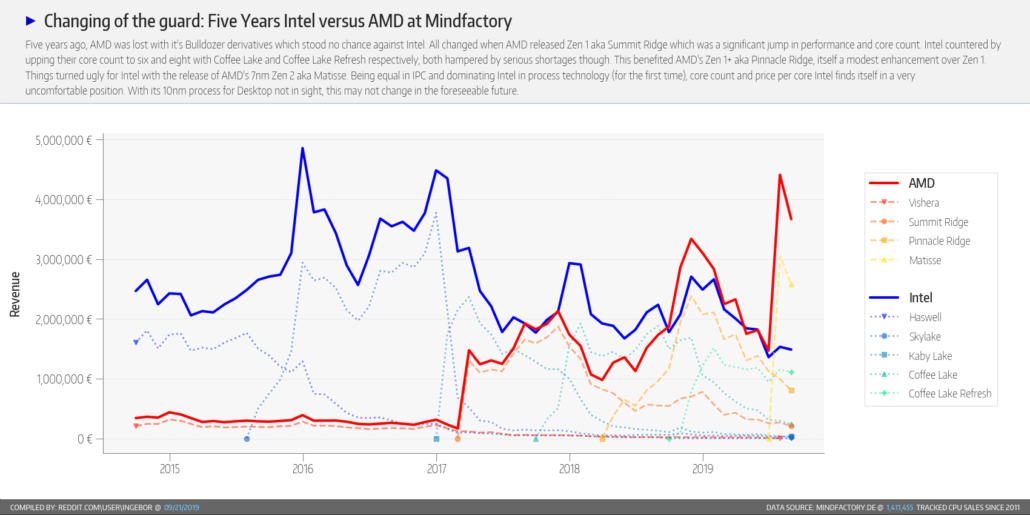 Because Matisse's average selling price is quite high, the revenue increase for AMD processors is actually more than double that of Intel according to the most recent data point - which isn't surprising considering only Intel's mainstream offerings provide any true competition to AMD counterparts (HEDT is priced too high to have a decent value proposal anymore) so Matisse essentially has a free run of the park. What I would really be interested in seeing is similar data from Amazon - because it has access to a much larger (and global) sample size and would be the most statistically significant data set around.

How do you think Intel's upcoming 14nm+++ Comet Lake is going to fare against AMD?
Share Tweet Submit