AMD & NVIDIA graphics card prices are showing signs of recovery as we enter the third quarter of 2021. Based on 3DCenter's latest report, it looks like the worst is over and GPU supply is returning to normal as seen on various European retailers.

nVidia: Availability goes up greatly. Prices go down again, from average +133% best price over MSRP (end of May) to now +91%.

As per 3DCenter's report, NVIDIA's GPUs, despite being available in higher quantities than the AMD GPUs, were sold out almost everywhere due to the cryptocurrency demand but that has changed since the recent crash which toppled both Bitcoin & Ethereum, the two most lucrative cryptomining algorithms to GPU miners. That along with the release of NVIDIA's LHR series is now prompting the same retailers to reduce the pricing of NVIDIA's GeForce RTX 30 series gaming graphics cards that could be witnessed in the pricing chart below:

There's still an abundance of non-LHR NVIDIA GeForce stock that these retailers still have access to and will continue to charge higher rates for them as they are still in demand from cryptocurrency miners. There's also a continued price war between retailers which has prompted the massive re-adjustment of prices for Nvidia's gaming GPU lineup. This is indeed a massive recovery from the peaks that we witnessed just a month ago but it remains to be seen whether this continues in the long run. 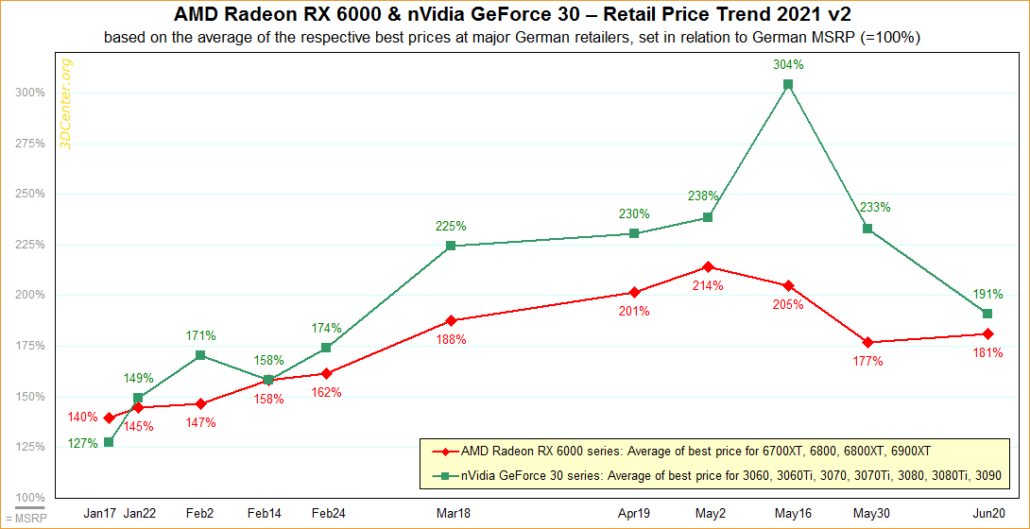 Moving over to the AMD camp, the Radeon RX 6000 series has been a mixed bag and the prices are practically unchanged however, even on that front, there are signs of recovery, more specifically in the supply department. AMD Radeon RX 6000 series has been available in much lower quantities than NVIDIA's GeForce RTX 30 series but that might change in the coming months as the company offers more mainstream offerings, offloading the burden off its higher-tier GPUs. The prices for the AMD Radeon GPU lineup can be seen below:

It's about time that we hear some good news as many gamers have been anxiously waiting to get a new graphics card since these cards were introduced.