We have been hearing many rumors about the AMD Strix Point APUs recently but this is the first time we get to hear the name of the successor to AMD's Raphael Desktop CPUs which is going to be known as Granite Ridge. It looks like AMD will be sticking with the Ryzen 8000 branding for its Zen 5 powered Granite Ridge (Mainstream Desktop CPU) and hybrid architecture-powered STRIX Point (Mainstream Desktop APU) families. 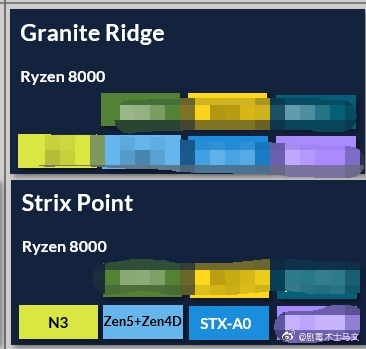 We don't get any specific information for the Ryzen 8000 Granite Ridge Desktop CPUs but they will be compatible with the AM5 LGA1718 platform and should feature onboard RDNA graphics, similar to the Raphael offerings. The earliest we can expect the Zen 5 Desktop CPUs to appear is 2023.

As for Strix Point APUs, we detailed a whole load about them yesterday & the same information is reiterated below:

It is stated that both Zen 5 and Zen 4 cores for Strix Point APUs will be based on the 3nm process node. What's interesting is that Zen 4 is initially fabricated on the 5nm process node so we might be looking at an enhanced version of the architecture. The little Zen 4 cores are said to be called Zen 4D. The AMD Strix Point Ryzen APUs are expected to feature 8 large Zen 5 cores and 4 smaller cores