AMD Navi GPUs are launching this year but we haven't really got any information on how they would perform and what the specifications would look like until now. Over at CompuBench, we might have our first listing of an AMD Navi "Radeon RX" part which delivers interesting results.

The listing at CompuBench was revealed by Dylan522p over at the r/hardware subreddit. The site lists down the specifications and performance metrics of a device codenamed "66AF: F1" and from the first impression, this seems like a next-gen part based on the Navi GPU as this specific device id hasn't appeared before. Now one thing to note is that this device may be based on the Navi GPU architecture or something entirely different hence I am treating this information as a rumor but the results are very interesting so let's take a look.

The purported AMD Navi GPU comes with 20 CUs which would amount to 1280 Stream processors. Now, this would be true if AMD keeps their CU design similar with 64 shaders per CU and the GPU is, in fact, featuring 20 CUs since CompuBench does has a habit of reporting the compute unit count incorrectly.

When it comes to performance numbers, we first have to take a look at whether we are comparing the various devices in the same OS and API as CompuBench can yield variable results when users run different OS/API. A device running in Windows/DirectX API would be much faster than a device running in OSX and using either OpenCL or Vulkan APIs. When it comes to performance results, the first tests are pure graphics where the rumored AMD Navi GPU posts much higher results and performance numbers compared to the Radeon RX 580. This almost matches the AMD Radeon RX Vega 56 territory. 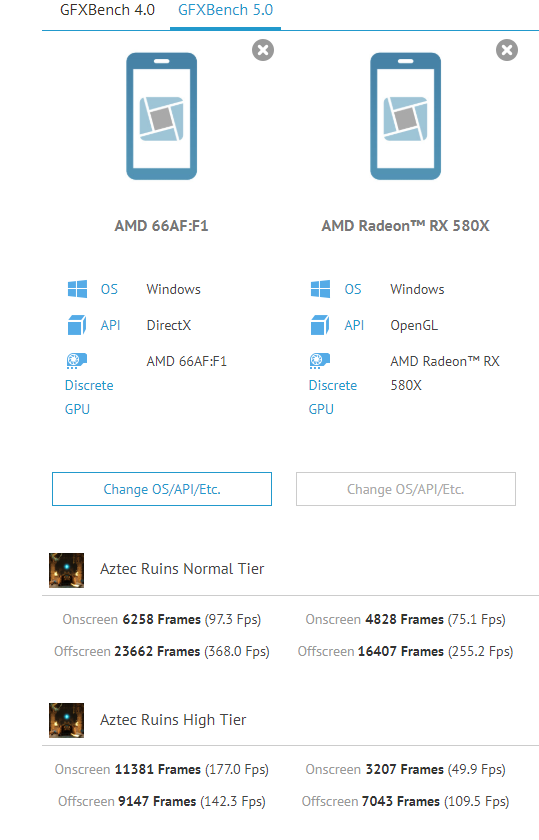 In compute benchmarks, however, the card is almost similar to the Radeon RX 580 which is what we had also been expecting since AMD Navi GPUs was tailormade for maximum graphics and gaming performance rather than compute horsepower. The deals with Microsoft and Sony for their next-generation consoles made that much very clear. So it's easy to tell that the desktop PC and notebooks parts would be getting a similar treatment.

Now if we compare the device to the Radeon RX Vega 64 graphics card, the compute performance of the Vega part is almost double but the AMD Navi GPU manages to come close to it in some graphics and bandwidth intensive tests which indicate that AMD would be relying on HBM2 VRAM, even on their mainstream cards. Other possible reason for this could be the use of GDDR6 which also delivers some great results as a 256-bit wide interface can go as high as 448 GB/s which is close to the 512 GB/s bandwidth of the Vega 56 and Vega 64 parts and possibly cheaper to implement.

With all that said, I still want to mention that this is just pure speculation of the part being based on a Navi GPU. The only credible information available right now is that the AMD Navi GPUs will feature the 7nm process node and a revamped architecture that is designed for gaming first. The GPUs will be used in both upcoming next-generation consoles and will be aiming a launch of 2H 2019 with mainstream gaming being the priority target market. We will keep you posted once we have more information on AMD's Next-gen Navi graphics cards.