AMD's second quarter results were announced today and earnings came in right around where analysts were expecting but the company guided down to a less-than-stellar third quarter.

Total revenue came in at $1.53 billion versus $1.76 billion a year ago. AMD stated that both its Computing and Graphics and Semi-Custom segments contributed to the year-over-year 13 percent decline in revenue.

Shares of AMD have dropped on the poor outlook for the third quarter and as of this writing are down nearly 5 percent to $32.43 in after-hours trading. 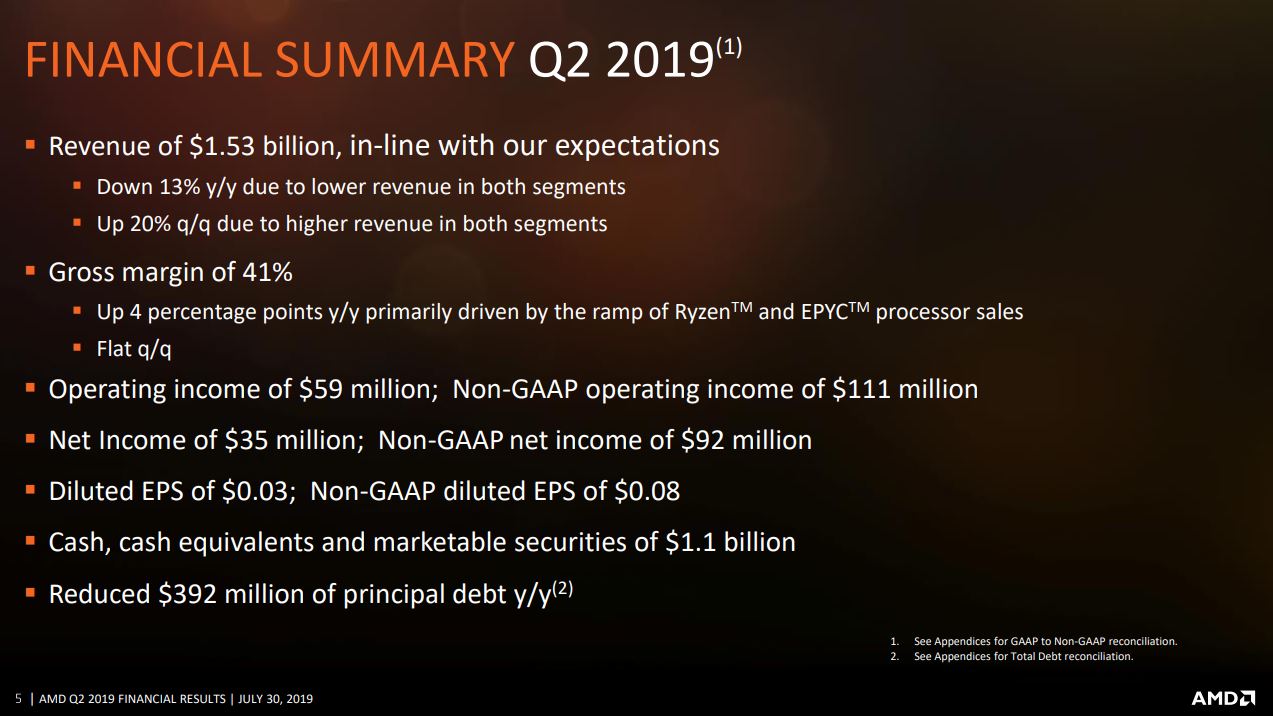 Today we are seeing the dichotomy of AMD's Computing and Graphics segment. Just as the name implies, both major product families are grouped under the business unit which includes Ryzen CPU products and Radeon graphics products. Unfortunately it seems when one is doing well the other can't quite keep up and this past quarter holds to that trend. 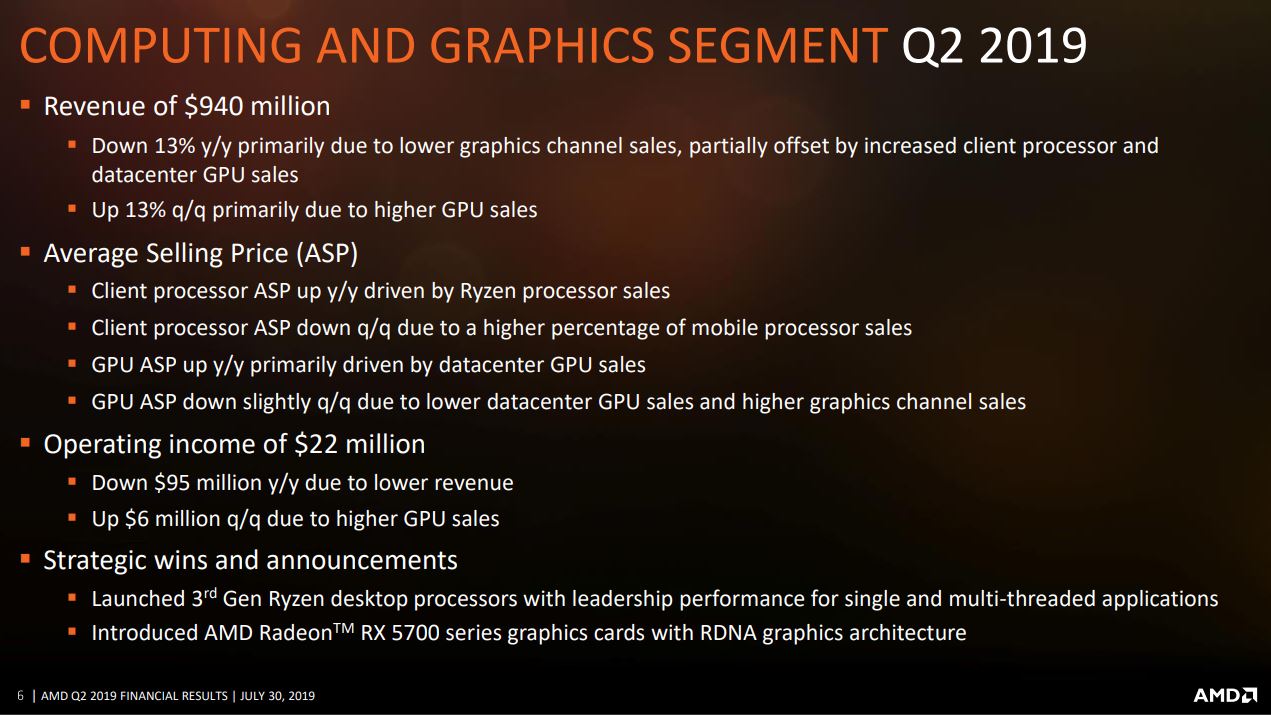 Straight from the company's investor relations department, and this won't come as a surprise to most of our readership, lower graphics channel sales were the primary weight dragging revenue down 13 percent year-over-year. Radeon VII, which launched earlier in the first quarter, didn't seem to gain much traction and beyond that unexpected release, the segment (formally the Radeon Technologies Group) has relied on the ancient Polaris chip which is at the heart of the budget Radeon 570 and 580 cards.

On the flip side, the Ryzen 2000 series has been very popular with builders and many merchant websites, which release their sales data, has shown some impressive numbers for the brand. We've seen a serious shift of market share away from rival Intel (NASDAQ:INTC) for enthusiasts and their CPU selection and AMD mentions that lower graphics card sales have been offset, if just partially, by increased client processor sales.

Operating income for the group plummeted compared to the second quarter of 2018 primarily due to the collapse in GPU demand, while sequentially compared to last quarter the situation seemed to improve a bit with higher GPU sales - perhaps Radeon VII actually sold well enough to move the needle ever so slightly.

Looking forward for the segment, Computing and Graphics refreshed its entire product stack, first with the release of the well-received Ryzen 3000 series of processors. Last week news began to break that Ryzen 3900X models were sold-out everywhere and prices on resellers were skyrocketing - speaking to high demand for the new chips. Second, while not quite the same slam dunk reception - Radeon 5700 and 5700XT graphics cards, powered by the Navi architecture, were released and early reports are showing solid demand.

Computing and Graphics booked $940 million in the quarter - about $140 million less than a year ago. Investors will be somewhat understanding of the slowdown in GPU demand as even NVIDIA (NASDAQ:NVDA) has shown some sluggish numbers recently, but now with a new stable of products to entice consumers, all eyes will be on C&G to start to show real growth through the remainder of the year. 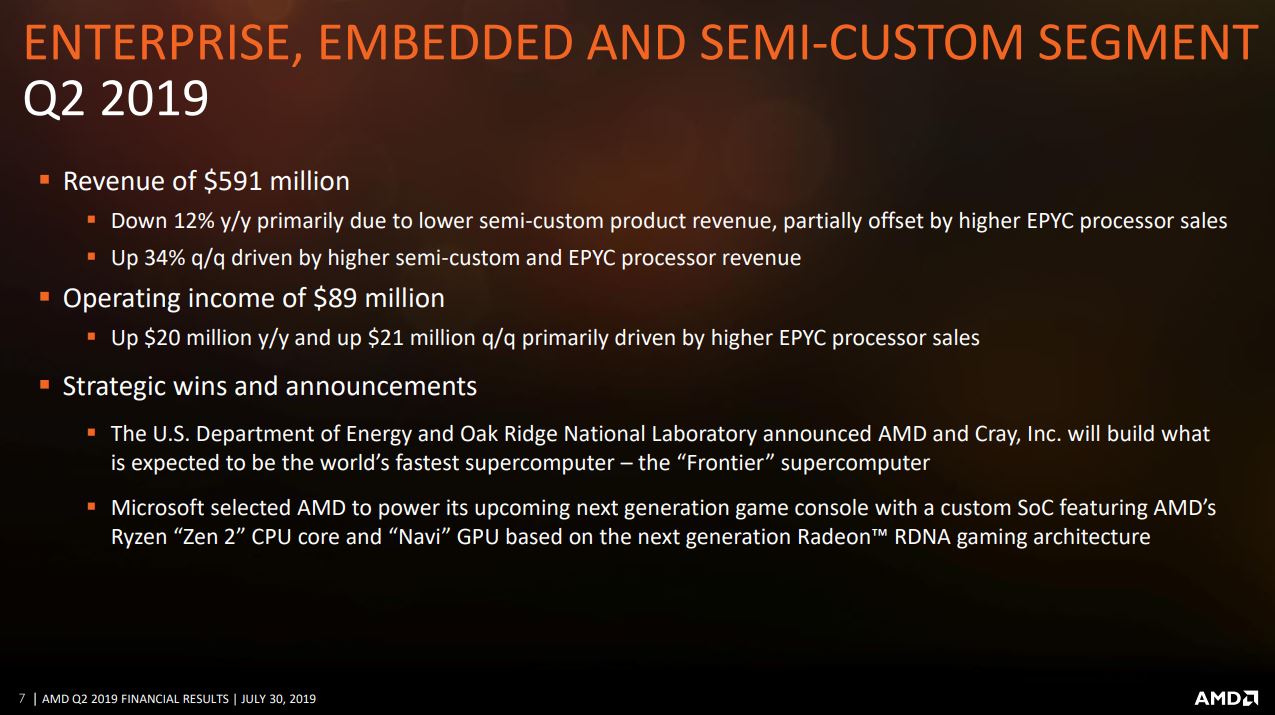 While Computing and Graphics received major product upgrades, EE&SC has yet to roll out updated 7nm 'Rome' EPYC server chips. Further to that point, the next cycle of consoles in the guise of the next-gen Xbox and Playstation 5 won't start shipping in volume until about a year from now.

Despite that, EE&SC is looking a bit better than C&G. Even though revenue fell 12 percent off from the same quarter a year ago, operating income actually increased year-over-year to $89 million, good for an increase of $20 million. We are finally starting to see EPYC start to move some volume, enough to actually make a material impact on the bottom line.

These numbers illustrate how important EPYC is for the firm. Design and procurement cycles for enterprise systems are much longer than OEM and retail computers, and EPYC platforms are creeping into more and more designs. Given what we know about 7nm Zen 2 cores, Rome-based EPYC products should offer a compelling alternative to data center managers and given the slow-but-steady traction we are seeing here will really start to benefit the company into 2020.

Looking ahead, AMD lowered its guidance for the third-quarter by $150 million to $1.8 billion where most analysts were expecting guidance of $1.95 billion. AMD's outlook statement:

Despite the lower-than-hoped for revenue number, there are some encouraging bits here. AMD is really starting to drive its margins and expects to achieve a 43 percent gross margin in Q3. In Q4 of 2017, its margins were 34 percent and a year ago by Q2-2018 it had improved margins to 37 percent. To now be knocking on the door to 43 percent gross margins is a really strong improvement all thanks to a richer product mix with a much-improved average selling price per unit. It's simply able to ask more for its products due to offering more competitive performance.

Another trend to comment on is AMD's cash and debt positions. We're now six quarters of straight profitability for the company, and so we're a long way away from the days of wondering if bankruptcy was right around the corner. This was once a company barely surviving off the back of razor-thin margin console/APU sales and now, while growth isn't quite spectacular, it's shoring up its fundamentals. Cash on hand has remained steady at $1.1B+ for the last several quarters while the company has paid down its total debt from $1.68 billion in Q2'18 to $1.3 billion today.

Where pundits may criticize the company is in market share. Improves margins and cash to debt positions are excellent and certainly are crucial to its long term success, AMD simply must continue to grow its revenue at a quicker pace. Mobile shipments in laptops and OEM desktop CPU volumes are still poor and despite EPYC starting to gain momentum, it is most likely still <3 percent of the market when it comes to the data center.