A relatively short update. AMD is teasing something that has been overdue for a long time. Red is teasing an AMD FX Series Processor, a desktop one. The teaser features a black box, barely in focus which depicts a new 'FX Processor' and the statement that 'something new is coming'. The teaser is in the form of a tweet posted by @amd_roy. 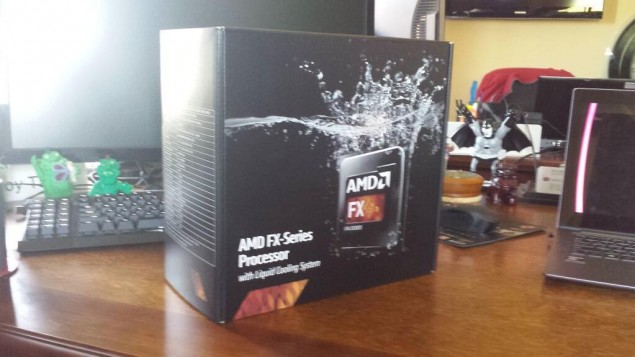 Now the box art features an FX chip being splashed with water, which is probably homage to the AIO or closed loop water cooler that is included with the chip. Now we have ofcourse no idea about this chip apart from the fact that it is a desktop processor. I would be willing to guess that this is on the FX-9000 series however, and ships with a 220W envelope. As usual here is some unhelpful speculation with probabilities:

The chip could either be:

The last FX-9000 chip was the FX-9590 I believe which came around a year ago. This new SKU comes after a year long haitus and is obviously timed to coincide with Devil's Canyon release. Ofcourse, it is highly unlikely that AMD is able to get an actual efficiency lead over Intel but the lack of AMD CPUs is such that any product will help at this moment.  I have a feeling we are going to be hearing about this teaser really soon from official channels so stay tuned. Here is the tweet in question by the way: